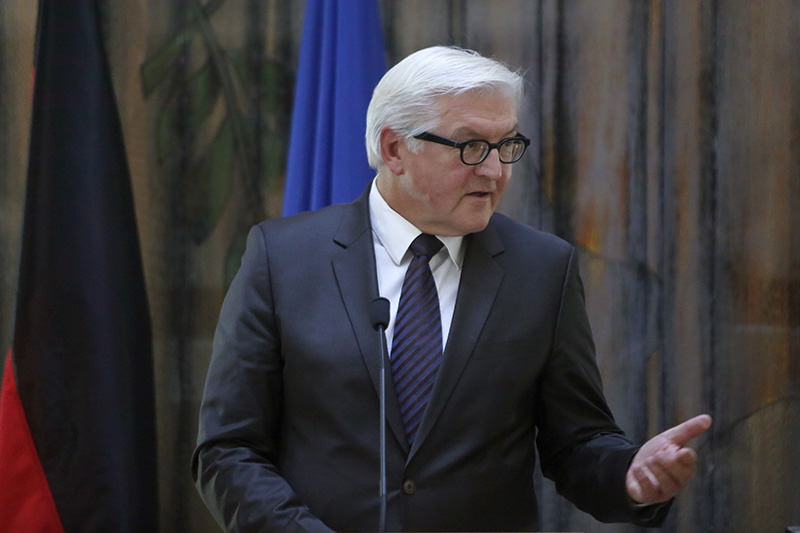 German Foreign Minister Frank-Walter Steinmeier (AP Photo)
by Daily Sabah with Agencies Nov 17, 2015 12:00 am
Germany's foreign minister said on Tuesday that his country will not take part in any air strikes against the DAESH terrorist group in Syria.

German Foreign Minister Frank-Walter Steinmeier ruled out the participation in air attacks saying, "It doesn't make sense if we add to the 16 nations which are carrying out air attacks in Syria," after talks with his Cypriot counterpart.

Steinmeier said Germany's decision to provide weapons and military equipment to Kurdish fighters battling DAESH in northern Iraq "was the right strategy" because they have not only held the front line there, but also made "slight territorial gains."

France invoked the European Union's mutual assistance clause for the first time on Tuesday, asking its partners for military help and other aid in missions in the Middle East and Africa after the Paris attacks.

The unexpected move to look to the European Union for help, rather than the U.S.-led NATO alliance, requires all of the bloc's 28 members to provide "aid and assistance", which Defense Minister Jean-Yves Le Drian said meant taking some of the burden off France as Europe's most active military power.

"France cannot do everything, in the Sahel, in the Central African Republic, in the Levant and then secure its national territory," Le Drian told a news conference during a meeting of EU defence ministers in Brussels where he invoked the EU's Article 42.7 mutual assistance clause.

French troops have been deployed in Mali, Burkina Faso, Niger and Chad in the Sahel area of West Africa.

More details will be discussed between France and individual EU governments, said EU foreign policy chief Federica Mogherini, although initial reactions were mixed. Germany and the Czech Republic offered help, as did Spain. But Madrid ruled out joining air strikes on Syria, saying it was already doing a lot, a position echoed by Denmark.

Britain, which has yet to join international air strikes in Syria, said it was ready to consider any French request for assistance.
Last Update: Nov 17, 2015 5:22 pm
RELATED TOPICS