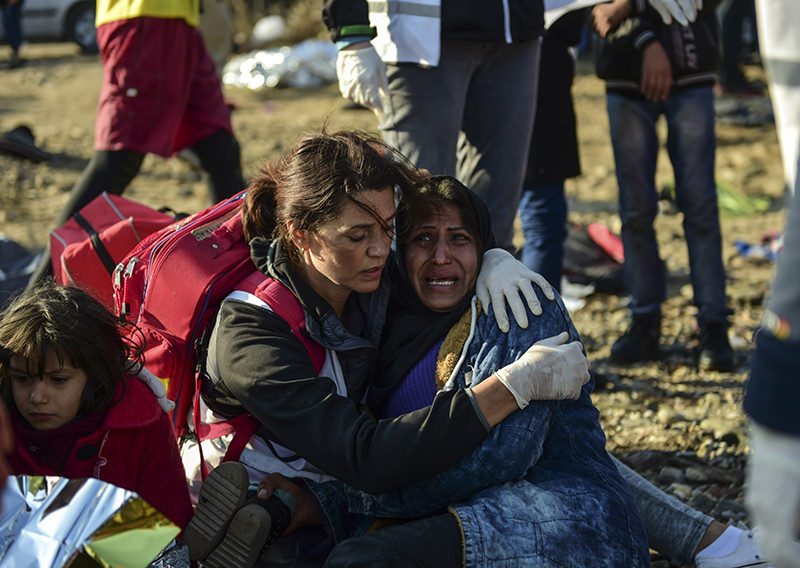 A woman cries as she just arrived on the Greek island of Lesbos along with other migrants and refugees, on November 17, 2015 (AFP Photo)
by Compiled from Wire Services
Nov 17, 2015 12:00 am
Nine refugees drowned and at least another three were missing after their inflatable boat sank off the Greek island of Kos early on Tuesday, the coastguard said.

They were the latest of nearly 3,500 deaths at sea this year among people making desperate bids to flee war and poverty and to reach Europe, according to UN figures.

Seven people were rescued, and emergency crews were still trying to recover all the bodies of the people who died from the capsized vessel, a coastguard official added.

The boat, which came from nearby Turkey and capsized overnight, was spotted by the crew of a Finnish ship participating in operations by Frontex, the EU's border security agency.

More than 600,000 refugees fleeing Syria, Afghanistan and other war-torn countries have arrived in Greece from Turkey this year, risking the short but perilous sea crossing, often on inflatable rafts. Hundreds have drowned.

Greece, struggling with its own economic crisis, has said it does not have the funds to care for all the arrivals before they move on to other destinations including Germany and Sweden.

Prime Minister Alexis Tsipras has said financial aid could be offered to Turkey to register and process the refugees on its territory instead. Tsipras is visiting Turkey on Tuesday and Wednesday to discuss the worst refugee crisis since World War Two.
Last Update: Nov 17, 2015 3:37 pm