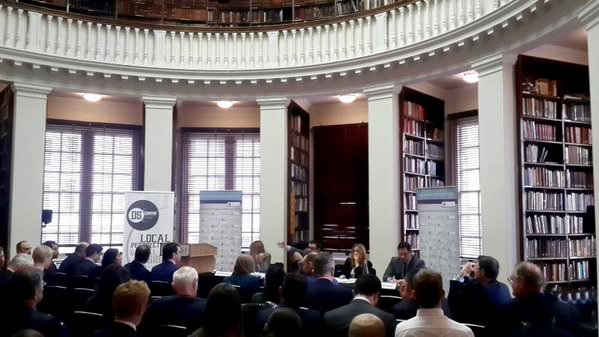 by Yusuf Selman İnanç Nov 21, 2015 12:00 am
In a joint event, organized by Daily Sabah Centre for Policy Studies and Royal United Services Institute (RUSI), prominent researchers, academics and an official from the Foreign Ministry of Turkey discussed regional developments, focusing on growing radicalism in the region and the fight against DAESH. The panelists have also touched on the relations between Turkey, Syrian Kurds and the PKK. Organizing its fourth event, Daily Sabah Centre for Policy Studies was hosted by one of Britain's most prominent centers for security studies, RUSI. Several senior journalists, politicians and academics attended the program, which was moderated by the director of International Security Studies at RUSI, Raffaello Pantucci. The first speaker was Gülnur Aybet, professor and head of department of Political Science and International Relations at Bahçeşehir University in Istanbul, who was followed by an official from foreign ministry of Turkey and Michael Stephens, who is the research fellow for Middle East Studies and head of RUSI in Qatar.

In the panel security issues, the fight against DAESH and the flow of foreign fighters were discussed. The Daily Sabah Centre for Policy Studies outlined the goal of the panel on its website as"The growing extremism on the basis of sectarian dimension across the world lure thousands of young people from several countries including the most developed and least developed ones as the militant movements have found safe havens in war-torn countries like Syria following the Arab Spring that euphorically swept across the region. In adverse, the growing threat, posed by the militant groups like Al-Qaida, DAESH through recruiting 'foreign fighters' from both the regional and international actors have brought about the questions of 'why people join the militant groups Lebanon-based Shiite group Hezbollah' 'what governments can do to preclude their citizens from flowing,' 'how the war-torn countries cause border troubles for neighboring countries like Turkey,' 'how the regional governments can cooperate,' and 'what non-governmental organizations contribute the efforts of the government.'" "Since the influx of foreign fighters to several different and warring groups which is considered as an international security problem has been posing a national threat to Turkey, this panel targets questioning the reasons of this trending issue and possible solutions through cooperation among the international community".

After the panel, Gülnur Aybet, professor and head of department of Political Science and International Relations at Bahçeşehir University in Istanbul underlined the necessity for coherent policy towards Syria and told Daily Sabah "There is no international coherence towards several issues like the dismissal of Assad, fight against DAESH, stopping the flow of foreign fighters," adding that international, regional and armed groups have to find a common ground for the solution. Touching on differing priorities of the actors that are involved in the war and suffering from the consequences, she said that "The U.S. and Russia are expected to find a common ground. The regional actors, Iran, Turkey and Saudi Arabia have to find a common ground. The groups on the ground have to be reconciled." She also stated that the U.S. and the EU have to understand why Turkey considers PKK affiliated PYD in Syria.

Daily Sabah Centre for Policy Studies has previously organized similar panels with prominent think-tanks and universities. Last March, a conference on Turkish foreign policy in Somalia was organized and hosted by SOAS in London. Another panel organized jointly by the DS Centre for Policy Studies and the European Council on Foreign Relations (ECFR) in London on May 27 discussed the five year Syrian civil war, its effects on Turkey and Ankara's Syria policy. The panel focused on Turkey's evolving response to the crisis in neighboring Syria with leading Turkish officials and experts. Aiming to focus on the elections, a panel was held jointly in Moscow with the Carnegie Moscow Center on June 3 regarding Turkey's upcoming June 7 elections and vision of a "New Turkey."
Last Update: Nov 24, 2015 4:56 pm
RELATED TOPICS