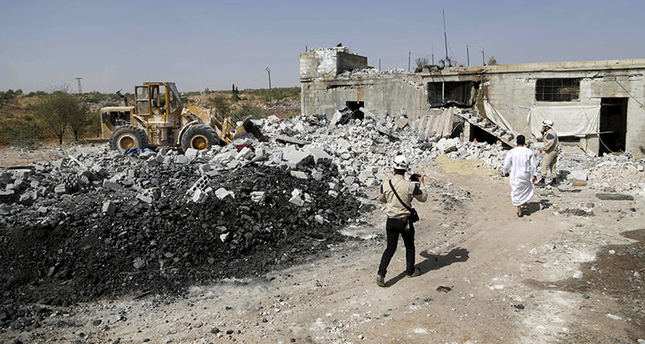 In Saturday's offensive, the first step was taken for the creation of the DAESH-free zone in Northern Syria. With the support of Turkish and US warplanes, Turkmen opposition forces have taken two towns from the terrorist organization, preventing the further advance of DAESH and ensuring security on the Turkey-Syria border

According to the security sources, 70 DAESH terrorists were killed in the offensive led by Turkmen opposition force Al-Sultan Murad Brigades. The operation was supported by six Turkish and five US warplanes.

According to the reports, Al-Sultan Murad Brigades cooperating with the Damascus Front advanced to the North of Aleppo, to the ground zero on the Turkey-Syria border. Infiltrating into Harcele and Delha towns, opposition forces defeated DAESH and took control of the two Turkmen-majority villages.

Six Turkish F-16s, four US F-15s and an AC-130 joined the offensive along with three drones.

Security sources added that this success in the fight against DAESH that can be defined as the first step for the creation of a DAESH-free zone in Northern Syria will further encourage opposition forces to fight DAESH terror and help ensure Turkey's border security.

Speaking about Turkey's stance on the recent developments in Northern Syria, President Recep Tayyip Erdoğan said in a live broadcast on Wednesday that declaring no-fly and safe zones is crucial to resolve the Syrian Crisis. The president also added that the coalition forces are taking joint action against DAESH.