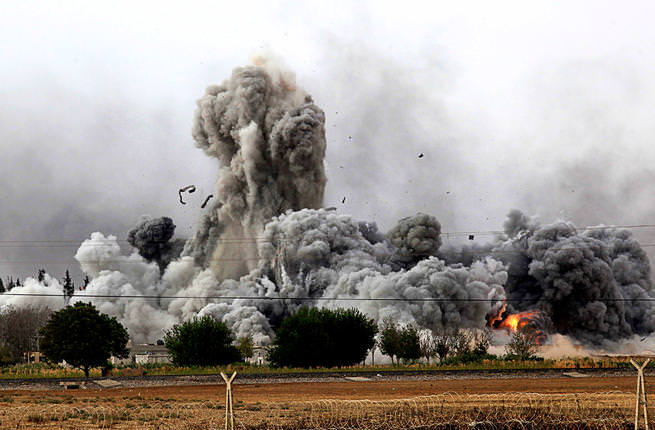 A file photo shows the moments immediately after a US-led airstrike on Daesh positions. (AFP Photo)
by Anadolu Agency Nov 23, 2015 12:00 am
Daesh -- which currently controls vast swathes of both Iraq and Syria -- is no longer just a Middle Eastern phenomenon, but now also enjoys the allegiance of several African militant groups.

The Sirte and Darnah provinces represent Daesh's two primary strongholds in Libya, which has remained in a state of chaos since the 2011 ouster and death of strongman Muammar Gaddafi.

Sirte, a Mediterranean coastal city and Gaddafi's birthplace, has been held by Daesh since January, following the withdrawal of forces loyal to Libya's Tripoli-based government.

The Libyan branch of Daesh consists of former pro-Gadaffi militants, former Ansar al-Shariah militants and Malian extremists who fled their own country after the French military intervention there in early 2013.

In recent months, the group has carried out a number of car bombings in capital Tripoli and in the western city of Misrata.

In eastern Libya, Daesh has a limited presence on the outskirts of Darnah, parts of which were subjected to fierce NATO airstrikes during the country's 2011 uprising and which were later captured by Daesh in late 2014.

The Shura Council of Mujahideen, which is in de facto control of Darnah, is currently fighting Daesh for control of the province.

On Nov. 19, the Shura Council declared that it had no links with Daesh, despite media reports that it had sworn allegiance to Abu Bakr al-Baghdadi, Daesh's leader in Iraq.

Five days earlier, the Pentagon announced that U.S. forces had killed Abu Nabil, leader of Daesh's Libya branch, in the first anti-Daesh airstrike to be carried out outside Syria or Iraq.

Egypt's Sinai Peninsula, meanwhile, which shares borders with both Israel and the Gaza Strip, has continued to see almost daily attacks on Egyptian security personnel since the elected President Mohamed Morsi was removed in a 2013 army coup.

On Oct. 31, a Russian passenger plane crashed in the peninsula, killing all 224 people on board, after taking off from Sharm el-Sheikh. Shortly afterward, a Daesh-linked group based in Sinai claimed responsibility for downing the plane.

Last week, Daesh released a photo on Dabiq -- the group's online propaganda magazine -- suggesting that the plane had been brought down by a bomb planted by one of its members.

The Sinai-based "Wilayat Sinai" group used to be known as "Ansar Beit al-Maqdis", but changed its name last November after swearing allegiance to Daesh.

Over the last two years, however, the group has focused its attacks primarily on Egyptian security personnel, especially after pledging allegiance to Daesh, which accuses the Egyptian army of "apostasy".

The Egyptian armed forces, meanwhile, have engaged in extensive operations in recent months with the stated aim of eradicating the group.

The "Jund al-Khalifah fi Ard al-Jazayer", or the "Soldiers of the Caliphate of Algeria", meanwhile, is an Algerian militant group that broke its alliance with Al-Qaeda in September of 2014, only to swear allegiance to Daesh.

In May of last year, the Algerian army announced that dozens of Jund militants -- including the group's leader -- had been killed. According to informed observers, however, the group has maintained "covert cells" in several parts of the country.

Daesh-linked groups have also carried out deadly attacks in Tunisia. On March 18, at least 24 people, mostly foreign tourists, were killed in an attack on a Tunis Museum. Again, on June 26, a Tunisian gunman opened fire on a crowded beach in Sousse, killing 38 tourists before being shot dead by police.

Nigeria's Boko Haram, for its part, pledged allegiance to Daesh in March of this year and now refers to itself as "the ISIS in West Africa Province".

Since 2009, Nigeria has battled a fierce Boko Haram insurgency that has left thousands dead, especially in the northeastern states of Borno, Yobe and Adamawa.

In recent months, Boko Haram has extended its operations throughout the Lake Chad region, hitting targets in Cameroon, Chad and Niger, as well as Nigeria.

Another militant organization in Africa to have pledged allegiance to Daesh is Somalia's Al-Shabaab.

Established in 2006 to fight the Somali government, the group had for years controlled much of central and southern Somalia, but has since lost ground to African Union forces working in conjunction with the Somali army.

Al-Shabaab has links with various groups in several other countries, including neighboring Kenya. After attacking a university in April -- in which scores of students were killed -- Al-Shabaab's Kenyan branch also pledged allegiance to Daesh.
Last Update: Nov 23, 2015 8:30 pm
RELATED TOPICS