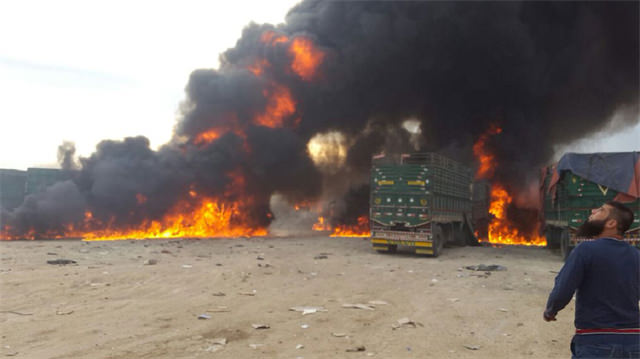 by Daily Sabah with Reuters Nov 25, 2015 12:00 am
At least seven people died, 10 got injured after an apparent airstrike, reportedly by Russian jets, targeted an aid convoy in northwestern Syrian town of Azaz near a border crossing with Turkey on Wednesday.

Footage filmed at a crossing on the Syrian side of the border with Turkey's southern province of Kilis showed lorries burning. The head of the rebel-run border crossing in the same area said separately that air strikes hit a garage for commercial trailers, killing seven lorry drivers.

Anadolu news agency reported that 20 lorries were targeted, which were carrying cement and iron brought from Turkey in a regular procedure.

Speaking to Daily Sabah, Serkan Nergis from the Humanitarian Relief Foundation (IHH) said that the targeted area is located some 5 kilometers southwest of the Öncüpınar Border Crossing.

Nergis said that IHH has a civil defense unit in Azaz and they helped locals to extinguish the trucks. Trucks were probably carrying aid supplies or commercial materials, Nergis added.

"Our teams helped extinguish the fire... The trucks do not belong to us and there is no information on who bombed them," Mustafa Özbek, an Istanbul-based official from the IHH, told Reuters.

The aid worker who filmed the aftermath initially said it appeared that aid trucks had been targeted.

IHH's civil defense teams are on the ground after Russian warplanes hit an aid truck in Azaz, #Syria. pic.twitter.com/gUfymNNxOU

Meanwhile, a US official said he was "aware of reports that a convoy of humanitarian relief vehicles was hit by an air strike today in the vicinity of Azaz."

The official noted that no coalition planes had been near the area for the last 24 hours.

"We are continuing to monitor the situation to determine all of the facts behind the incident," he said.