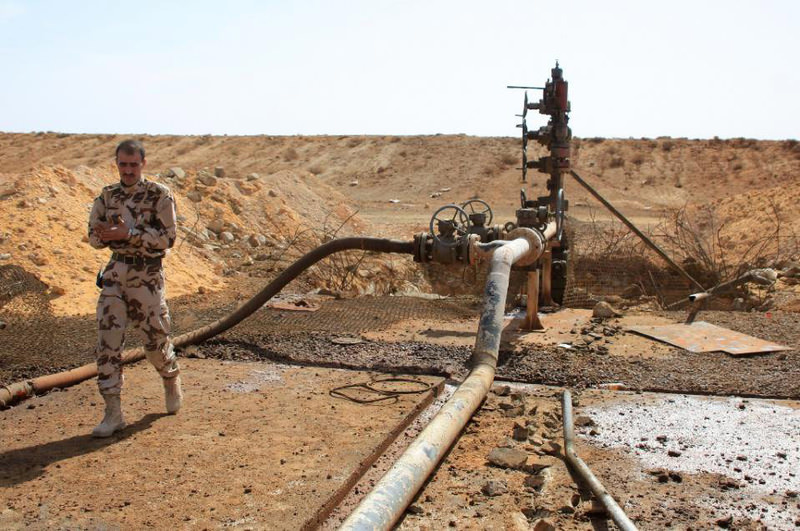 A member of the Syrian army u0131nspects the jazal oil field after fierce battles with Daesh.
by Anadolu Agency Nov 25, 2015 12:00 am
The Obama administration on Wednesday announced new sanctions on 10 Syrian individuals and entities, including what it called a middleman working to facilitate Daesh oil sales to the Syrian government.

The Treasury Department stated that Syrian businessman George Haswani has been facilitating oil purchases for Damascus through the HESCO Engineering and Construction Company, which the department said he controls.

"HESCO is a Syrian engineering and construction company that operates energy production facilities in Syria, reportedly in areas controlled by Deash," the department said in a statement.

The EU previously sanctioned George Heswani in March. He and HESCO were sanctioned by the Treasury Department Wednesday.

The department also imposed economic penalties on three individuals and five entities in response to the Syrian government's violence against its citizens.

They include Mudalal Khuri, who "has had a long association with the Assad regime and represents regime business and financial interests in Russia," and Kirsan Ilyumzhinov, a Russian businessman and former president of the World Chess Federation who works with Khuri.

The businessmen own the Russian Financial Alliance Bank, which was also slapped with sanctions.

"The Syrian government is responsible for widespread brutality and violence against its own people," said Adam J. Szubin, acting Under Secretary for Terrorism and Financial Intelligence. "The United States will continue targeting the finances of all those enabling Assad to continue inflicting violence on the Syrian people."

The fresh round of sanctions also targeted individuals and businesses with ties to Khuri.
Last Update: Nov 26, 2015 12:16 am
RELATED TOPICS