Russia reluctant to cooperate with West in anti-DAESH campaign 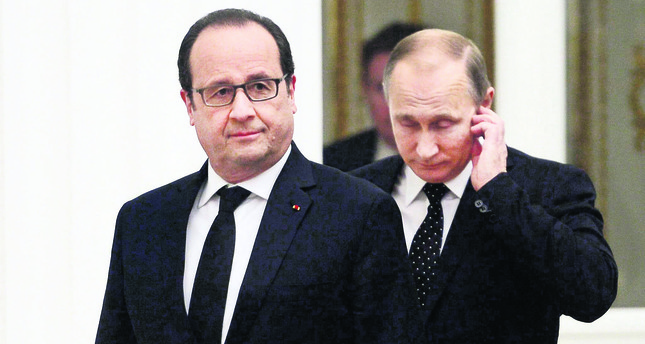 Although French President Francois Hollande said Moscow and Paris will be sharing intelligence during the fight against DAESH, the Kremlin said Western powers were not ready to cooperate with Russia against the militant group

The Kremlin said Friday that Western powers were not ready to form a coalition with Russia to fight DAESH militants in Syria, after talks between President Vladimir Putin and French leader Francois Hollande. "At the moment, unfortunately, our partners are not ready to work within the format of single coalition," Putin's spokesman Dmitry Peskov told reporters. He added however that Russia remained open to cooperation "in any format our partners would be ready for."

After militants killed 130 people in Paris this month in attacks claimed by DAESH, Hollande travelled to Moscow on Thursday, hoping to bolster global efforts to crush DAESH. Putin had urged global powers to band together in the fight against militants in September during an address to the United Nations General Assembly, just before Russia launched its own bombing campaign in Syria. Separately, a U.S.-led coalition that includes France had already been staging air strikes against DAESH targets in Syria for over a year. Putin and Hollande agreed Thursday to coordinate strikes and share intelligence in what was the most concrete sign of progress from the French leader's diplomatic marathon that has also included talks with the leaders of the United States, Germany, Britain and Italy. But the idea of a single anti-DAESH coalition involving Western powers and Russia did not get off the ground as U.S. President Barack Obama is said to have given a cool response to Hollande's proposal.

Despite Russia's aggressive stance against the West, France seeks to tighten its relations with Moscow. The presidents of France and Russia agreed Thursday to tighten cooperation in the fight against DAESH, although they remained at odds over their approach toward Syria's Bashar Assad.

Hollande and Putin agreed on increasing intelligence sharing, intensifying their airstrikes against DAESH in Syria and cooperating on selecting targets. "We agreed on a very important issue: To strike the terrorists only, DAESH and the militant groups only, and not to strike the forces and the groups that are fighting against the terrorists," Hollande said after the meeting. "And we are going to exchange some information about that: what can be struck, and what must not be struck." But the two countries remain at odds in their approach toward Assad, with Hollande saying the Syrian head of state "does not have his place in Syria's future," and Putin stressing that "the Syrian president's fate should be entirely in the hands of the Syrian people." Putin described Assad's army as a "natural ally" in the fight against DAESH an essential force capable of battling the extremist group on the ground.

Despite the differing approach French Foreign Minister Laurent Fabius said on Friday troops loyal to Assad could be used to fight DAESH, but only in the framework of a political transition without Assad. "Troops on the ground cannot be ours, but (there can be) Syrian soldiers from the Free Syrian Army, Sunni Arab states, and why not regime troops," Laurent Fabius told RTL radio without specifying whether he meant immediately or in the long-term. Clarifying Fabius' comments, an official in his entourage said the minister was reiterating France's long-standing position that there could be no cooperation with Syrian government forces to battle DAESH until a unity government was in place. "It could only happen in the framework of a political transition and Fabius stresses that this transition is urgent and indispensable," the official said.