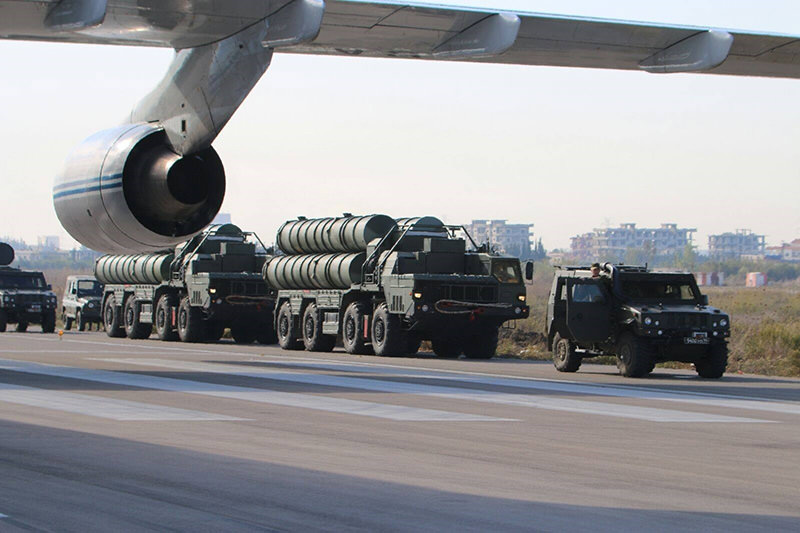 by Daily Sabah with Agencies Nov 28, 2015 12:00 am
No U.S.-led coalition airstrikes against Daesh positions in Syria took place since last Thursday, coinciding with the time when Russia decided to deploy S-400 missile defense systems near its base in Latakia after its jet was downed by Turkey.

Speaking to Russian Sputnik news agency, a spokesperson of the Combined Joint Task Force Operation Inherent Resolve (CJTF-OIR) confirmed that the coalition had made no sorties against Daesh targets in Syria since Thursday, although airstrikes against the group in Iraq continued with 18 strikes on terrorist positions.

The spokesperson said Friday that the absence of anti-Daesh coalition airstrikes "has nothing to do with the S400 deployment" in Syria. "The fluctuation or absence of strikes in Syria reflects the ebb and flow of battle," the spokesperson was quoted while underlining that it takes a lot of time to research targets to achieve maximum effect and minimizing civilian casualties.

Following a Russian Su-24 bomber was downed by a Turkish F-16 fighter due to airspace violation after 10 repeated warnings on Tuesday, Russia decided to deploy S-400 missile systems at the Hemeimeem Airbase located near western Syrian port of Latakia. The pilot and a soldier participating in rescue efforts were killed by local groups fighting against regime forces.

Russian Defense Minister Sergey Shoigu stated that S-400 missiles will be deployed to Syria. Shoigu's statement was the last part of a series of actions in Russia's shift of military build-up in the war-torn country. The missile cruiser Moscow was also dispatched right next to Turkish territorial waters.

Russia Today reported that S-400 missile launchers were airlifted to Syria by Antonov An-124 Ruslan super-jumbo aircraft 24 hours after the decision was announced on Wednesday. The Russian Defense Ministry released a video that the launchers are leaving the aircraft and being positioned around the base.

RT's article stated that the S-400 is capable of shooting down any aircraft cruising up to 17,000 kilometers per hour, leaving intercontinental ballistic missiles as the only aircraft unaffected by the system. It can engage with targets at distances up to 400 kilometers flying on altitudes up to 27 kilometers. This range covers at least 75 percent of Syrian territory, along with the airspaces of Lebanon, Cyprus, half of Israel and a vast part of Turkey, the report said. The system is also equipped with radar that can detect moving objects on the ground, such as cars or military vehicles, within a range of 600 kilometers.
Last Update: Nov 28, 2015 4:14 pm
RELATED TOPICS