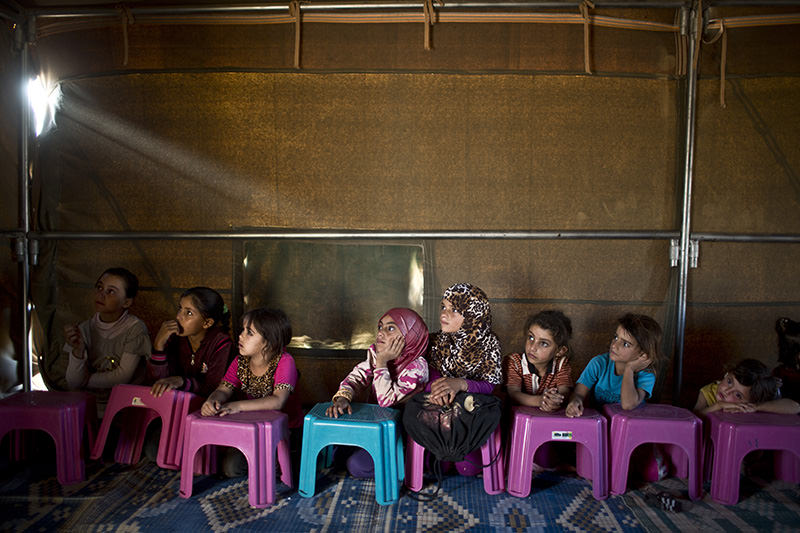 Syrian children near the Syrian border on the outskirts of Mafraq, Jordan (AP Photo)
by Dec 08, 2015 12:00 am
Around 12,000 people who have fled the war in Syria are stranded at the Jordanian border, the UN High Commissioner for Refugees said Tuesday, urging authorities to allow them into the country.

Warning of "deteriorating humanitarian conditions", the UNHCR appealed to the government to prioritise entry for the most vulnerable, including the elderly, babies under six months of age and pregnant women.

A statement said 11,000 refugees were in Rukban, about eight kilometres (five miles) from the point where the Syrian, Iraqi and Jordanian borders meet. The remaining 1,000 are in Hadalat, about 90 kilometres further west.

The areas are in a rocky desert area, devoid of shade, water or vegetation, the statement said.

"The health situation is deteriorating, with increasing signs of diarrhoea, vomiting and acute malnutrition among children," it added.

"If refugees are not admitted to Jordan and substantial assistance not provided, the lives of refugees will be at risk in the coming winter."

For its part, Human Rights Watch reported that aid workers say they do not have enough resources to assist the growing numbers of people at the border, and that unless Jordan allows them to move to transit sites, 20,000 people will be stuck in the border area by the end of the year.

The UNHCR noted Jordan's "tremendous contribution" in hosting more than 630,000 refugees. It also highlighted the heavy strain that has put on the country's infrastructure and economy, as well as security concerns.