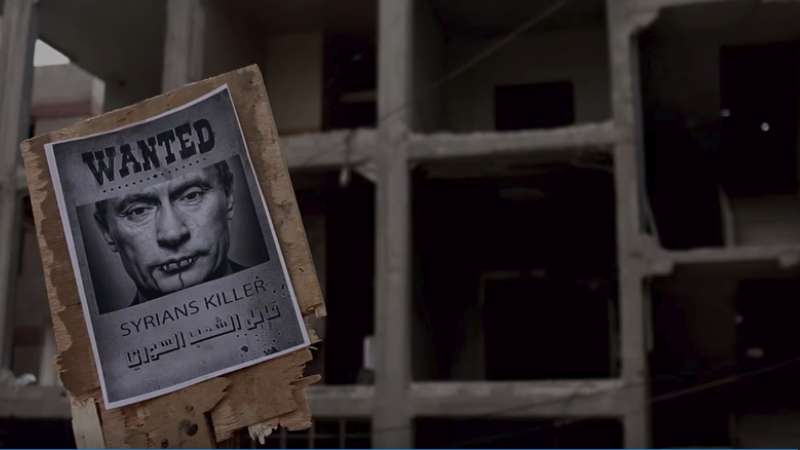 by Daily Sabah Dec 15, 2015 12:00 am
A group of activists in the Syrian capital Damascus distributed leaflets in different neighborhoods of the city and its countryside to denounce the Russian intervention in Syria. The posters were stamped with a photograph of Putin depicted as Dracula and saying, "Wanted, Syrians' Killer" on it.

The activists who opposed Assad distributed the posters in the regime-controlled neighborhoods of the city as part of a campaign named "Russia [with Assad] is partner in killing Syrians". Despite the tight "security" measured imposed by the regime, the youngsters' campaign was to challenge Assad along with Russia and to remind everyone that "Syrian people have the right to peace, freedom and dignity," as they put it. "Let Syrians live peacefully," the protestors said in their campaign.

The capital Damascus contains hundreds of Assad checkpoints and thousands of soldiers of the regime. So, the activities, in initiating such a campaign, put their lives at risk, and showed that they resist the ongoing war also without means of weapons.

Russia began air operations in Syria on Sept. 30 after receiving parliamentary approval. The Kremlin claimed the airstrikes, which followed a military build-up in Syria, aimed to support the forces of Bashar Assad, a long-standing Russian ally, against ISIS. However, Turkey and the West have accused Russia of targeting moderate fighters opposed to Assad, many of which are supported by Turkey and the U.S.

The Syrian activists said Russian airstrikes have yet killed 403 civilians in Syria, 97 of who were children. The strikes reportedly bombed 44 residential targets in Syria destroying schools, hospitals, bakeries and other residential buildings.

A video prepared by the activists displaying horror of the Russian airstrikes as well as their life-threatening initiative in poster distribution can be found below: