Putin: Russia ready to use ‘more military means’ in Syria ‘if need be’ 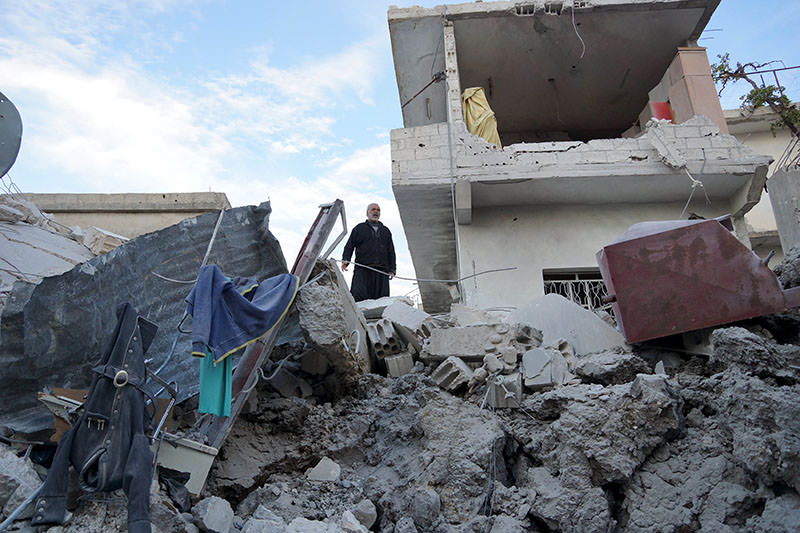 A man inspects a damaged site from what activists said were airstrikes carried out by the Russian air force in Nawa city, Deraa, Syria, Nov 21, 2015 (Reuters)
by Compiled from Wire Services
Dec 19, 2015 12:00 am
The Russian armed forces have not employed all their capability in Syria and may use "more military means" there if necessary, Russian news agencies quoted Vladimir Putin as saying on Saturday.

"We see how efficiently our pilots and intelligence agents coordinate their efforts with various kinds of forces - the army, navy and aviation, how they use the most modern weapons," Putin was quoted as saying in a speech.

"I want to stress that these are by far not all of our capabilities," he said. "We have more military means. And we will use them - if need be."

Putin was also quoted on Saturday as saying that Russia finds it "easy to work with both al-Assad" regarding the Syrian crisis. The Russian president made the comments in the trailer of an upcoming television documentary released Saturday.

Putin did not elaborate on the specifics of Russia's cooperation with Syria in the trailer, which contained a segment of an interview filmed last week following the Russian leader's annual press conference.

Moscow has staunchly supported Assad's beleaguered regime while Turkey and the U.S. have insisted the Syrian leader must step down to facilitate a political solution to a crisis that has killed more than 250,000 people and forced millions from their home.

Russia launched a bombing campaign in Syria on September 30 at the request of al-Assad that Moscow says is targeting Daesh.

But Turkey and the US say Moscow's strikes are chiefly aimed at Western-backed moderate opposition groups fighting Assad.

Putin was also quoted as saying on Saturday that Russia's political ties with Turkey will not improve but that Russia has no intention of damaging relations with the people of Turkey.

"I want to repeat it now: we consider the Turkish people a friendly nation, and we do not want to disrupt relations namely with the Turkish people," Russian news agencies quoted Putin as saying.
Last Update: Feb 24, 2016 6:54 pm