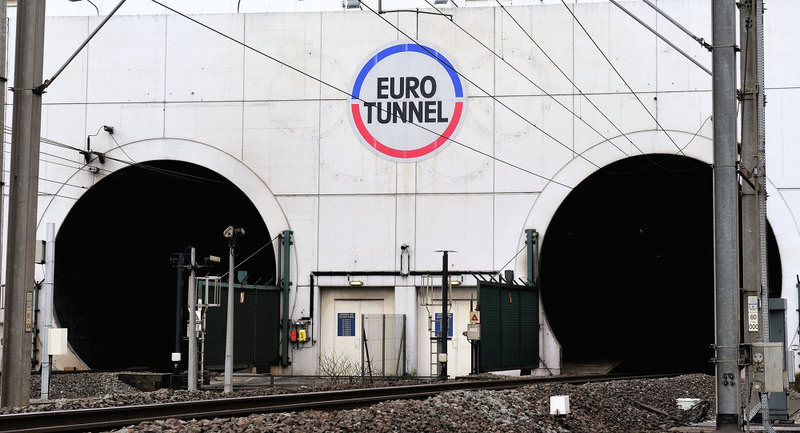 Many refugees try to cross the Channel Tunnel to get to England. (AFP Photo)
by Compiled from Wire Services Jan 04, 2016 12:00 am
A Sudanese man accused of walking almost the entire length of the undersea Channel Tunnel from France to Britain has been granted asylum, his representative said on Monday.

Abdul Rahman Haroun, 40, was arrested at the English end of the 50 km-tunnel on Aug. 4 and charged with obstructing a railway under an obscure 19th Century law, has been held in prison since then and was due to face trial this month.

Shortly after his arrest Haroun applied for asylum, which was granted on December 24, though he only got the news Monday in Canterbury Crown Court.

"I can confirm, as was stated in open court today, that Mr Haroun has been granted asylum," caseworker Sadie Castle of law firm Kent Defence told AFP.

Haroun was charged under an 1861 law on malicious damage with causing an obstruction to an engine or carriage using the railway, but the case has now been adjourned for two weeks so prosecutors can decide whether to proceed with it, Castle added.
Haroun, dressed in a grey tracksuit, appeared in court via a CCTV link from nearby Elmley Prison, where he has been detained since his arrest, local media reported.

Judge Adele Williams ordered that he be freed on the condition that he reports at his local police station once a week, and he is due back in court on January 18.

He pleaded not guilty to the charges at an earlier hearing.

His legal team previously argued that their client qualified for protection under Article 31 of the 1951 UN Refugee Convention, of which Britain is a signatory.

This states that members "shall not impose penalties, on account of their illegal entry or presence, on refugees who, coming directly from a territory where their life or freedom was threatened... enter or are present in their territory without authorisation."

Haroun is the first refugee known to have made it to Britain by foot through the railway tunnel, a perilous 12-hour journey in near total darkness that involved dodging trains travelling at up to 160 km per hour.
Last Update: Jan 04, 2016 5:50 pm
RELATED TOPICS