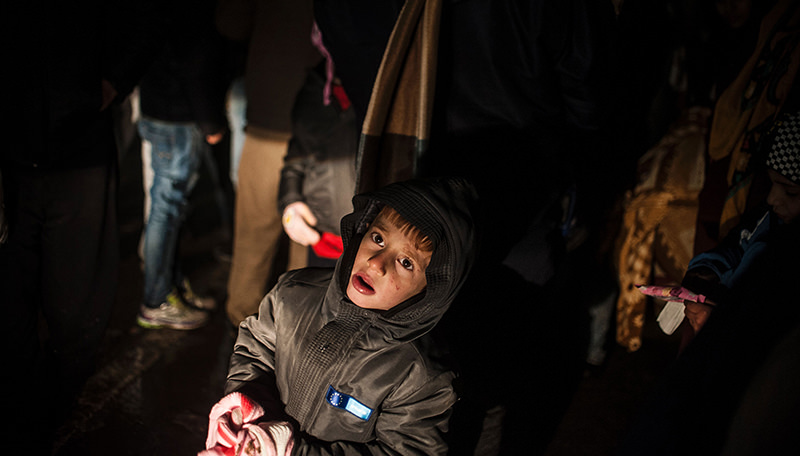 A child looks on while waiting with a group of migrants to board a bus in Presevo, southern Serbia, on January 5, 2016 (AFP Photo)
by Anadolu Agency Jan 05, 2016 12:00 am
British lawmakers on Tuesday urged the country to accept thousands of Syrian child refugees who otherwise face a "perilous journey" across Europe.

Chairman Stephen Twigg said the government should accept a proposal by charity Save the Children to accept 3,000 refugee children from within Europe.

In a statement issued by the committee, he said: "Children are clearly some of the most vulnerable refugees this crisis has created. The committee heard that close to 80 percent of Syria's child population already needs humanitarian assistance.

"Having survived the treacherous journey, there is a grave possibility that unaccompanied children become the victims of people traffickers who force them into prostitution, child labor and the drugs trade. This is an issue of utmost urgency."

Save the Children's proposal would be in addition to the government's existing pledge to accept 20,000 Syrian refugees from camps in Turkey, Jordan and Lebanon.

Britain is currently the second-largest provider of funds to countries bordering Syria.

Save the Children Chief Executive Justin Forsyth said: "These children need and deserve our help and protection. Left to fend for themselves, lone children are extremely vulnerable along the refugee route.

"Children report having been beaten, extorted and sexually abused on their journey. Save the Children helps by providing food, warm clothes and psychological care across Europe and the Middle East but nothing can replace a safe and secure home."