23 people, including children starve to death in blockaded Syrian town 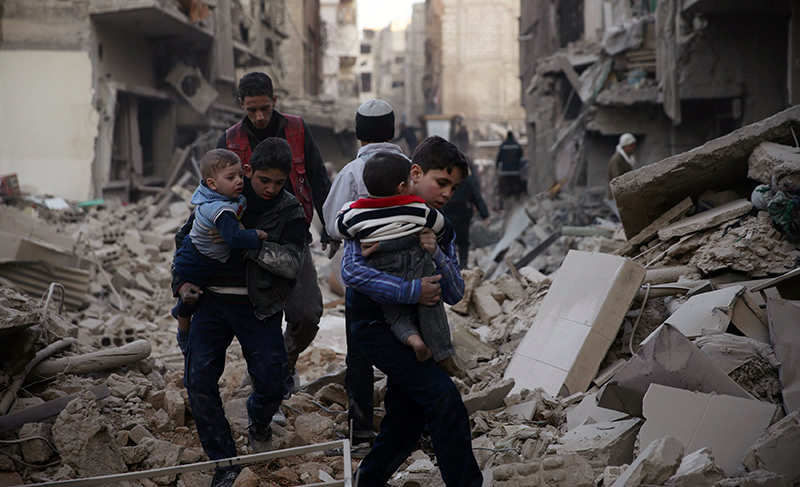 Youths carry children through a site damaged from what activists said was shelling by the Assad Regime in the town of Douma, eastern Ghouta in Damascus (Reuters Photo
by Anadolu Agency Jan 06, 2016 12:00 am
Twenty-three people died of starvation last month in the blockaded town of Madaya northwest of Damascus, a new report revealed.

Madaya residents lack many basic needs after being victims of an ongoing blockade by the Assad regime and the Hezbollah Shia militia, which planted landmines around the town.

According to the Madaya health committee report, six children were among the victims in December.

Eight other people were killed by landmines as they tried to escape the town, which has been under siege for 190 days so far, the report added.

Living conditions in the town further deteriorated as winter set in. Electricity is non-existent and many people use what is left of their destroyed homes for heating purposes, the report said.

Local sources said food prices were up dramatically since the regime's blockade began. A kilogram of rice reportedly costs around $115 now.

The U.S. State Department said the U.S. was aware of the "devastating" situation.

"The regime is using starvation as a tool, a tactic of war. It's pretty heart-rending, and frankly, it's despicable," said agency spokesman John Kirby.

The victims' situation was more "proof of the brutality" of the Assad regime and its lack of legitimacy, Kirby said, while reiterating the need for a political and peaceful solution in Syria.

"What we're seeing gives us a renewed sense of urgency to move this process forward and it's just all the more proof that it's vital that Vienna process not be derailed by the current tensions in the region," he said.

Samir Tateen, a local member of the Syrian coordination committee, said around 70 people have died of starvation and another 50 have passed away of various diseases in the past six months.

Some 4.5 million people live in hard-to-reach areas across Syria, with nearly 400,000 of them in besieged zones with little or no access to basic supplies or assistance, according to UN figures.
Last Update: Jan 07, 2016 11:57 am
RELATED TOPICS