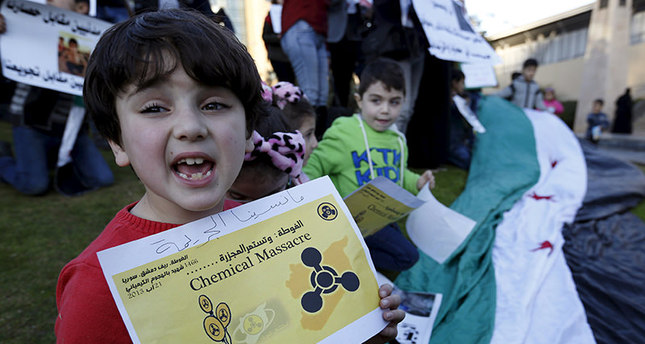 Syrian children call for the lifting of the siege off Madaya and Zabadani towns in Syria, in front of the U.N. headquarters in Lebanon Dec 26, 2015. (Reuters Photo)
by reuters Jan 07, 2016 12:00 am
Warnings of widespread starvation are growing as pro-government forces besiege an opposition-held town in Syria and winter bites, darkening the already bleak outlook for peace talks the United Nations hopes to convene this month.

The blockade of Madaya, near the border with Lebanon some 50 kilometers east of Beirut and 20 kilometers northwest of Damascus, has become a focal issue for Syrian opposition leaders who told a U.N. envoy this week they will not take part in talks with the government until it and other sieges are lifted.

At least 10 people have died of starvation in Madaya in the past six weeks, the Syrian Observatory for Human Rights says. Opposition activists say the number of dead is in the dozens although Reuters could not independently confirm the reports.

"We were living on tree leaves, on plants, but now we are struggling in a snow storm and there are no more plants or leaves," said Majed Ali, 28, an opposition activist who spoke to Reuters by phone from Madaya.

Where rice or powdered milk are available, the prices can reach some $300 a kilo, residents said.

With half a meter of snowfall this week, furniture, doors and wooden fixtures and fittings are being burnt to heat homes, said Ali, the opposition activist.

Blockades have been a common feature of the nearly five-year-old war that has killed an estimated 250,000 people. Government forces have besieged rebel-held areas near Damascus for several years and more recently rebel groups have blockaded loyalist areas including two villages in Idlib province.

The fate of Madaya, where the World Food Programme (WFP) says the lives of 40,000 people are at risk, may be linked to those villages. The areas were all part of a local ceasefire agreement agreed in September but implementation has been halting.

Aid agencies were hoping for easier access to the area following the ceasefire deal concluded under U.N. supervision.

"WFP is deeply concerned about the reported humanitarian situation in Madaya, which has been besieged for many months, now threatening the lives of nearly 40,000 people," WFP spokeswoman Bettina Luescher said in response to a question from Reuters.

"Madaya was last reached on 17 October with 3,900 food rations -- enough to feed over 19,000 people for one month," she said. "Since then, no more food assistance or humanitarian supplies made it to these areas as was planned."

A U.N. commission of inquiry has said that siege warfare has been used "in a ruthlessly coordinated and planned manner" in Syria's civil war, with the aim of "forcing a population, collectively, to surrender or suffer starvation".

The blockade of Madaya began about six months ago when the Syrian army and its Lebanese ally, Hezbollah, started a campaign to reestablish Bashar al-Assad's control over areas at the Syrian-Lebanese border, including the town of Zabadani.

A source who is close to Damascus and familiar with the situation in Madaya denied civilians had been prevented from leaving, and said the number of people in the town had been exaggerated.

But the Britain-based Observatory says 15 people including children had been killed while trying to flee, either shot dead or killed by landmines planted to enforce the blockade imposed by government forces and Hezbollah fighters.

Syrian officials could not be reached for comment. Aid agencies say access to Madaya was requested six times in 2015, but provided only once.

A U.N. Security Council adopted on Dec. 18 setting out a road map for peace talks calls on the parties to allow aid agencies unhindered access throughout Syria, particularly in besieged and hard-to-reach areas.

A newly formed opposition council set up to oversee negotiations has told U.N. envoy Staffan de Mistura that this must happen before the talks he plans to hold on Jan. 25.

They also told him that before negotiations, Assad's government, which has military support from Russia and Iran, must halt the bombardment of civilian areas and barrel bombing, and release detainees in line with the resolution.

"We find that it will not be possible to start negotiations while bombardments continue on civilian areas and residents," Riad Nassan Agha, a member of the opposition body, told Reuters. "We must also show our people certain accomplishments."

"We are awaiting answers from Mr. Di Mistura."

Pro-government forces surrounding the town, believed by locals to be Hezbollah fighters, have offered food in exchange for weapons handed in by rebel fighters, residents say.

A spokesman for the International Committee of the Red Cross said it hoped to deliver aid to both Zabadani and Madaya, and al-Foua and Kefraya in the coming days.

"We have been receiving quite concerning reports from Madaya, but also from al-Foua and Kefraya about the situation of the people there, as in all besieged areas in Syria," Pawel Krzysiek, the spokesman, said.
Last Update: Feb 24, 2016 8:31 pm
RELATED TOPICS