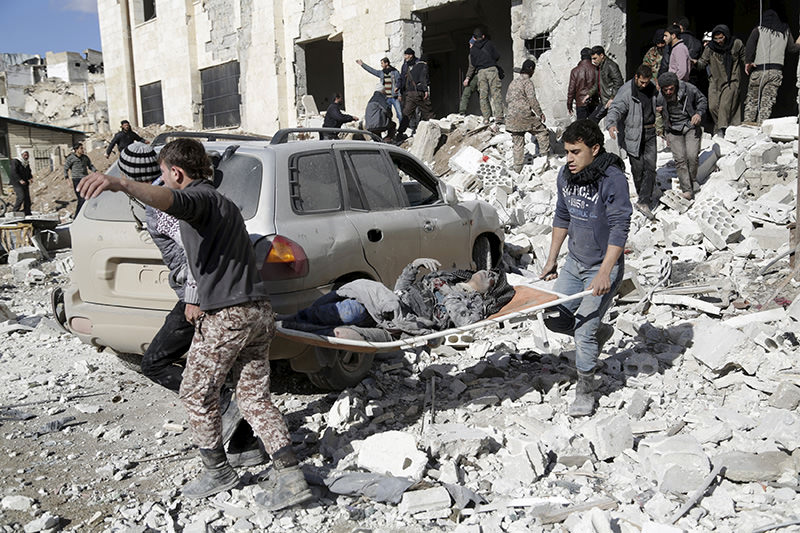 by Compiled from Wire Services Jan 09, 2016 12:00 am
At least 40 people were killed and 100 others were injured in a Russian airstrike targeting a prison complex run by the al-Qaida linked Nusra Front in the town Maarat-al-Numan in Syria's northwestern province of Idlib on Saturday.

The Syrian Observatory for Human Rights (SOHR) said the strikes hit a building housing the group's religious court and a jail. Observatory head Rami Abdel Rahman said the dead included prisoners and Nusra Front fighters, and could include civilians who had been at the market.

The SOHR put the death toll at 39 and Turkey's state-run Anadolu Agency reported 47 casualties and 100 wounded, while the Local Coordination Committees, another activist group, said the airstrike killed 51. Meanwhile, citing local sources, Reuters reported that up to 70 people were killed in the airstrike.

Dozens of people were also wounded and many remained trapped under the rubble, the SOHR said.

Russian warplanes have been conducting air strikes in Syria since September 30 under the pretext of targeting Daesh terror organizations, but they mostly target other moderate opposition groups along with extremist groups. The Nusra Front and Daesh are fierce rivals and regularly clash in Syria.