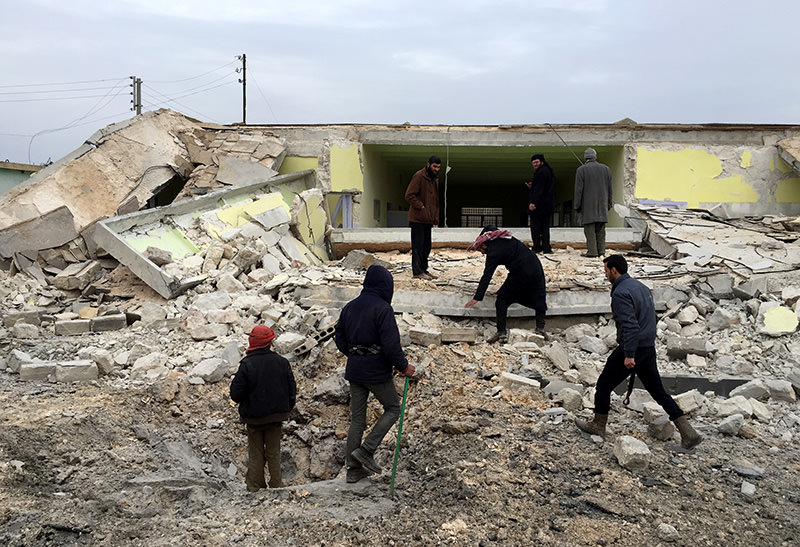 | AA photo
by Compiled from Wire Services Jan 11, 2016 12:00 am
12 children were killed along with their teacher and two adults in a Russian airstrike that hit a school in Syria's Aleppo province on Monday, a monitor group said, updating its previous figure of eight dead.

The Syrian Observatory for Human Rights said that other than the 12 children, three adults were also killed in the airstrike, including a teacher. The strike in the town of Anjara also injured at least 20 people, all of them children and teachers, the monitoring group added.

Photos distributed by media activists in Aleppo province showed a classroom full of rubble with the wooden tops of desks blown off their metal frames.

There was no immediate comment from the Russian defence ministry.

In Geneva, a spokesman for the U.N. children's fund UNICEF said it was looking into the reports of the raid.

Turkey's state-run Anadolu Agency (AA), on the other hand, stated that other than the children, 9 others were killed in the airstrike, among whom one was the school children's teacher. The other eight belonged to the same family, whose house was destroyed in the attack.

Also, 25 others were injured in the airstrike, AA reported. Search and rescue teams were said to be in the area, trying to recover the dead bodies, as the death toll is feared to rise.

Russian warplanes have been conducting air strikes in Syria since September 30 under the pretext of targeting the Daesh terror organization, but they mostly target other moderate opposition groups along with civilians.

Moscow's campaign has come under fire by Western officials who accuse the Kremlin of seeking to prop up Syria's Bashar al-Assad.
The monitor said in late December that Russian air strikes had killed more than 2,300 people since they began on September 30, among them 792 civilians.

Moscow has slammed as "absurd" allegations that its strikes have killed civilians.

Meanwhile, the coordinator of the Syrian opposition, former prime minister Riad Hijab, said Monday there would be no negotiations with the Syrian regime while "foreign forces" were bombing the country.

"We cannot negotiate with the regime while there are foreign forces bombing the Syrian people," Hijab said after a meeting with French President Francois Hollande in Paris.

"We want to negotiate, but to do that the conditions have to be there," Hijab said.

The opposition coordinator also said that contrary to the monitoring group's earlier reports of 12 children beiing killed in the Russian airstrike, three schools had been hit, killing a total of 35 children and injuring dozens.

Hollande said there was no future for Syria's Bashar Assad and called for immediate humanitarian aid for the besieged parts of Syria, notably Madaya.

The government and opposition are due to meet in Geneva for talks on Jan. 25.