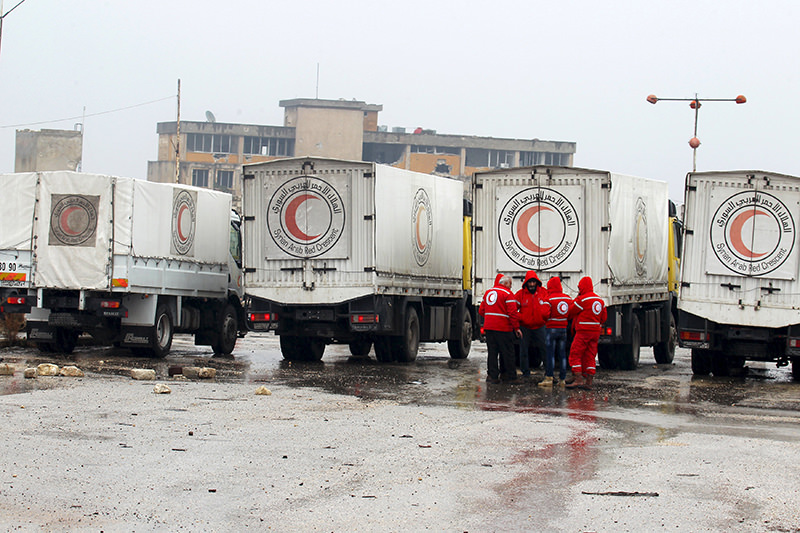 Red Crescent workers stand near their vehicles prior to inspection from rebels before heading to al Foua and Kefraya, in Idlib province, Syria January 11, 2016. (REUTERS Photo)
by Daily Sabah with Reuters Jan 11, 2016 12:00 am
An aid convoy entered a besieged Syrian town on Monday where thousands have been trapped without supplies for months and people are reported to have died of starvation.

Trucks carrying food and medical supplies reached Madaya near the Lebanese border and began to distribute aid as part of an agreement between warring sides, the United Nations and the International Committee of the Red Cross said.

Dozens are said to have died from starvation or lack of medical care in the town and activists say some inhabitants have been reduced to eating leaves. Images said to be of emaciated residents have appeared widely on social media.

At the same time, another convoy began entering two Shi'ite villages, al Foua and Kefraya in the northwestern province of Idlib 300 km (200 miles) away. Rebel fighters in military fatigues and with scarves covering their faces inspected the aid vehicles in the rain before they entered.

Women cried out with relief as the first four trucks, carrying the banner of the Syria Red Crescent crossed into Madaya after sunset, with civilians waiting on the outskirts of the town as the temperature dropped and it began to get dark.

The full aid operation was expected to last several days, the ICRC said.

Images said to be from Madaya and showing skeletal men with protruding ribcages were published by the Syrian Observatory for Human Rights, a group that monitors the war, while an emaciated baby in a nappy with bulging eyes was shown in other posts.

Dr Mohammed Yousef, who heads a local medical team, said 67 people had died either of starvation or lack of medical aid in the last two months, mostly women, children and the elderly.

"Look at the grotesque starve-or-surrender tactics the Syrian regime is using right now against its own people. Look at the haunting pictures of civilians, including children - even babies - in Madaya, Syria," U.S. Ambassador to the United Nations Samantha Power said on Monday.

"There are hundreds of thousands of people being deliberately besieged, deliberately starved, right now. And these images, they remind us of World War Two; they shock the conscience. This is what this institution was designed to prevent."

The United Nations said last Thursday the Syrian government had agreed to allow access to the town. The world body is planning to convene peace talks on Jan. 25 in Geneva in an effort to end nearly five years of civil war that have killed more than a quarter of a million people.

But Syrian opposition co-ordinator Riad Hijab accused Russia of killing dozens of children in a bombing raid on Monday and said such action meant the opposition could not negotiate with Bashar al-Assad's government.

There was no immediate comment from Russia, which denies any targeting of civilians in the conflict.

Madaya residents on the outskirts of the town said they wanted to leave. There was widespread hunger and prices of basic foods such as rice had soared, with some people living off water and salt, they said.

One opposition activist has said people were eating leaves and plants.

The blockade of Madaya has become a focal issue for Syrian opposition leaders, who told a U.N. envoy last week they would not take part in the proposed talks with the government until it and other sieges were lifted.

The siege began six months ago when the Syrian army and its Lebanese ally, Hezbollah, started a campaign to reestablish Assad's control over areas along the Syrian-Lebanese border.

Hezbollah responded to accusations it was starving people in Madaya by denying there had been any deaths in the town, and accusing rebel leaders of preventing people from leaving.

Blockades have been a common feature of the civil war. Government forces have besieged rebel-held areas near Damascus for several years and more recently rebel groups have blockaded loyalist areas including al Foua and Kefraya.

"Only a complete end to the six-month old siege and guarantees for sustained aid deliveries alongside humanitarian services will alleviate the crisis in these areas," a joint statement from several international agencies said.

The areas included in the latest agreement were all part of a local ceasefire deal agreed in September, but implementation has been difficult, with some fighting around Madaya despite the truce.

Each side is looking to exert pressure on the other by restricting entry of humanitarian aid, or evacuations, in their areas of control, the Observatory says.

The last aid delivery to Madaya, which took place in October, was synchronised with a similar delivery to the two other villages.

Aid agencies have warned of widespread starvation in Madaya, where 40,000 people are at risk.

Hezbollah has said rebels in the town had taken control of aid, which they were selling to those who could buy. The people of Madaya were being exploited in a propaganda campaign, it said.

"They wanted to escalate it as a humanitarian issue ahead of the Geneva talks," he told Al Manar TV.

A U.N. commission of inquiry has said siege warfare has been used "in a ruthlessly coordinated and planned manner" in Syria, with the aim of "forcing a population, collectively, to surrender or suffer starvation".

One siege is by Daesh, on government-held areas of the city of Deir al-Zor.

A U.N. Security Council adopted on Dec. 18 setting out a road map for peace talks calls on the parties to allow aid agencies unhindered access throughout Syria, particularly in besieged and hard-to-reach areas.

A newly formed opposition council set up to oversee negotiations has told U.N. envoy Staffan de Mistura that this must happen before the talks he plans to hold on Jan. 25.

They also told him that before negotiations, Assad's government, which has military support from Russia and Iran, must halt the bombardment of civilian areas and barrel bombing, and release detainees in line with the resolution.
Last Update: Feb 24, 2016 8:34 pm
RELATED TOPICS