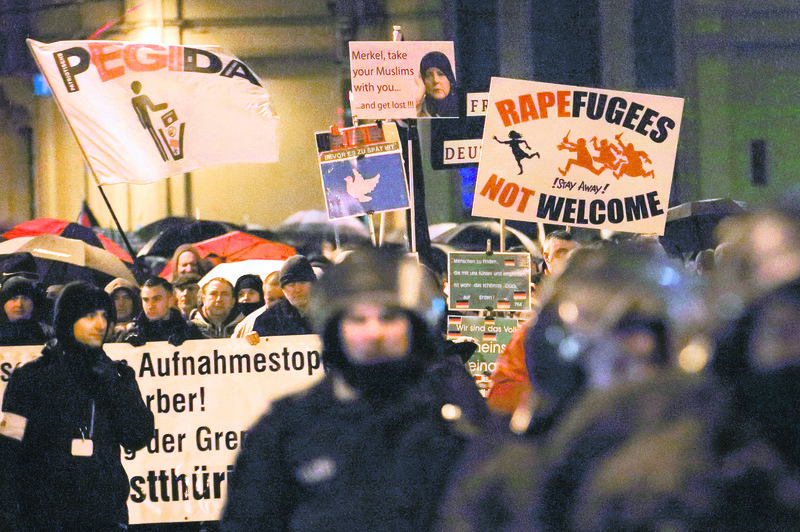 Another far-right rally turned violent on Tuesday in Germany a day after seven asylum seekers were attacked. Police said some used social media to organize a series of attacks on refugees

German police are treating the latest in a series of attacks on asylum seekers as "anti-foreigner crimes" and believe that they were organized via social media, a spokesman said on Monday.

The fact that right-wing extremists were strategically using the internet to plan indiscriminate attacks against "non-Germans" is "an alarming signal that we are taking very seriously," police spokesman Norbert Wagner said. Wagner was referring to two incidents that took place in Cologne on Sunday in which six Pakistanis and one Syrian asylum seeker were attacked by groups of "right-wing extremists from the hooligan, rocker and bouncer scenes."

Two of the six Pakistanis were brought to hospital with serious injuries after as many as 20 people attacked them at just before 7 p.m. (1800 GMT) on Sunday near Cologne's main train station. About 20 minutes later, a group of five men attacked a Syrian man at a nearby location. He was injured but didn't require medical treatment.

The news comes after comments from the interior minister of North Rhine Westphalia, where Cologne is located, confirming that the perpetrators were "almost exclusively" of a North African or Arab background further inflamed an ongoing migration debate.

A total of 553 police complaints - 45 percent of them related to sexual violence - have been filed in Cologne, prompting politicians to call for increased security, the expulsion of criminal asylum seekers and the reduction of migrant flows going forward.

Of the 19 suspects identified by police, 10 are asylum seekers and nine are in Germany illegally, according to a report submitted to a parliamentary committee looking into the crimes. None have residences in Cologne and four are currently in police custody.

Later Monday, pro- and anti-immigrant groups staged competing demonstrations in the eastern city of Leipzig. Pro-migrant groups formed a chain of lights in solidarity with the refugees who have come to Germany in recent months, drawing between 2,300 and 2,800 people, organizers said. However, demonstrators from the LEGIDA group, an offshoot of the Dresden anti-foreigner group PEGIDA, said they had gathered between 1,500 and 2,000 members for their demonstration.

The crowd loudly vented its anger at Chancellor Angela Merkel, whom they accuse of destroying their homeland by allowing in 1.1 million asylum seekers last year. "We are the people", "Resistance!" and "Deport them!", chanted the followers of LEGIDA.While the rally stayed peaceful, police said a separate group of more than 200 masked right-wing supporters, carrying placards with racist overtones, went on a rampage in the eastern city of Leipzig on Monday night, throwing fireworks, breaking windows and vandalizing buildings.

The key theme of the LEGIDA protest was the New Year's Eve attacks in the western city of Cologne, where hundreds of women reported being groped and robbed by men described as Arabs and North Africans, in scenes that have shocked the country.

Police said yesterday they have arrested 211 far-right extremists who went on a rampage on the sidelines of a xenophobic rally in Leipzig, setting cars on fire and smashing windows.

The attacks have deepened public skepticism towards Chancellor Angela Merkel's open-door refugee policy and her mantra that Germany can cope with the 1.1 million migrants who arrived in the country last year. It has also fueled right-wing groups. Though Chancellor Angela Merkel and several politicians from her coalition have warned against blanket suspicion of foreigners - many of whom are seeking refuge from war - Muslim groups have reported a spike in anti-Islam sentiment. "We are witnessing a new dimension of hate," Aiman Mazyek, the head of the Central Council for Muslims in Germany, told regional newspaper Koelner Stadtanzeiger on Monday, adding that the number of attacks against its members were on the rise.

Justice Minister Heiko Maas earlier Monday warned that "those who now hound refugees - on the Internet or on the streets - have obviously just been waiting for the events of Cologne" and were now "shamelessly exploiting" the attacks. North Rhine-Westphalia's state's Interior Minister Ralf Jäger said it was "wrong and dangerous" to stigmatize a whole foreign group as sexual predators.

Germany has recorded a sharp jump in crime attributed to the far-right in tandem with the surge in asylum seeker arrivals which reached 1.1 million last year.

Germany registered nearly 1.1 million people as asylum seekers last year, according to Interior Ministry figures, and politicians who have called for limits on migration have seized on the incident in Cologne to bolster their position.

Muslim groups have reported a spike in anti-Islam sentiment in Germany amid heightened tensions over the mass sexual assaults in Cologne on New Year's Eve, with Germany's migrant influx being blamed.

"We are witnessing a new dimension of hate," said Aiman Mazyek, the head of the Central Council for Muslims in Germany speaking with regional newspaper Koelner Stadtanzeiger on Monday, adding that the number of attacks against Muslims is on the rise. Since the beginning of the New Year, the number of harassment incidents and threats against the council have increased considerably. People are taking to social media and fueling the fire. "The 'brown mob' is raging on social media, and feels justified in their prejudices, finally having the chance to let their hatred run wild for Muslims, foreigners, different-looking people and dissenters," said Mazyek.

Despite warnings from officials against the blanket suspicion of foreigners, many of whom are seeking refuge from war, Muslims are being put under an umbrella, receiving dozens of threatening phone calls and harassing emails and being forced to cut off all phone lines, according to the Independent. Mazyek says the association is determined to counter the growing resentment with education and prudence.
RELATED TOPICS