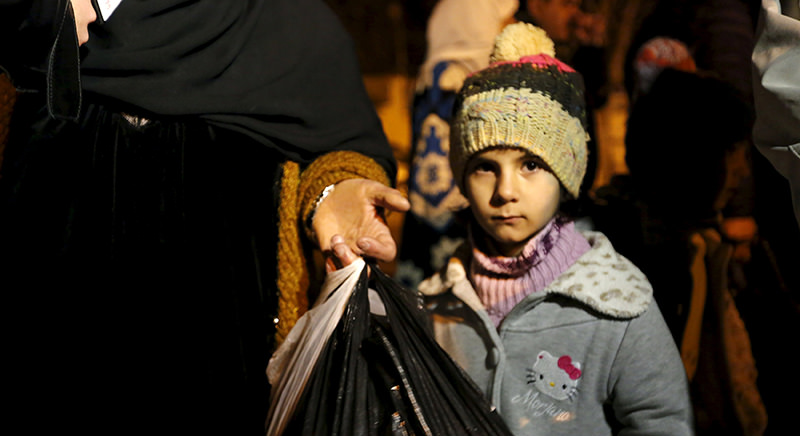 A Syrian girl waits to depart Madaya with her family, whose members say they have received permission from the Syrian government to leave the besieged town, after an aid convoy entered Madaya (Reuters Photo)
by Anadolu Agency Jan 13, 2016 12:00 am
Intentionally starving civilians through sieges as a method of warfare in Syria could constitute war crimes, a UN spokesman said Wednesday.

Aid workers who were with the first aid convoy to get through to the besieged town of Madaya on Monday have given on-site accounts of civilians starving to death, including people "extremely thin, skeleton, that are now barely moving".

The town has been blockaded by the Syrian regime and Hezbollah militants for close to 200 days.

"It is clear that the intentional starvation of people through blockades, barricades, siege could very well constitute a war crime," UN spokesman Stephane Dujarric told reporters in response to a question whether the man-made calamity was a crime against humanity.

"This is exactly what we are seeing in various parts of Syria today," Dujarric said.

Living conditions in Madaya have deteriorated as winter sets in. Electricity supplies have been cut and residents have resorted to burning the remains of their homes to provide heating.

Dujarric said there were more aid convoys on their way to the town in the coming days to deliver assistance, as well as to Kafraya and Foua, two other besieged towns in the north of the country.

On Tuesday, UN's resident and humanitarian coordinator in Syria, Yacoub El Hillo, said the residents of Madaya "have almost no hope that the world cares about their plight."

The Syria conflict, which will enter its sixth year in March, has left more than 250,000 people dead and turned the country into the world's largest source of refugees and displaced persons, according to UN.

Approximately 4.5 million people live in hard-to-reach areas across the country, with nearly 400,000 of them in 15 besieged locations with little or no access to basic supplies or assistance, according to UN figures.