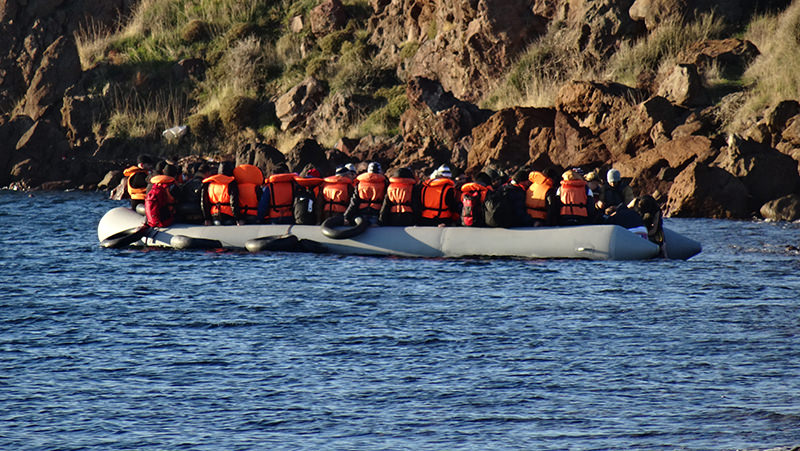 The flow of Europe-bound migrants persist despite rough winter weather. (AA Photo)
by reuters Jan 14, 2016 12:00 am
The bodies of nine people, some of whom may have drowned up to 10 days earlier, were found on Turkey's western coast this week as the flow of Europe-bound migrants persisted despite rough winter weather and the efforts of the Turkish government.

The bodies of five men and one woman were found washed up on the shores of Seferihisar in the coastal province of Izmir on Tuesday, district governor Resul Çelik told Reuters, adding that doctors believed they drowned five to 10 days before.

The coastguard said separately it had found the bodies of a girl and two women near Ayvacık, further north, after a boat partially capsized. It rescued 13 people, but a search continued for two men and a boy.

More than a million refugees and migrants arrived in the European Union last year fleeing war or poverty in the Middle East, Africa and Asia, and nearly 3,700 died or went missing en route. The great majority came via Turkey to Greece.

While winter crossings are even riskier than in summer, thousands are still attempting to make them. According to the International Organization for Migration, more than 24,000 crossed the Mediterranean to Greece and Italy in the first two weeks of January, and its spokesman Joel Millman said 58 deaths had been recorded as of Jan. 12.

Reuters TV footage showed on Thursday, a group of people including women and children preparing to sail from Ayvacık in a boat with a plastic barrel attached to it, using a shovel to paddle away.

In a deal struck at the end of November, Turkey promised to help stem the flow of migrants to Europe in return for cash, improved visa access and renewed talks on joining the European Union.

Eda Bekçi, head of Mülteci-der, a refugee charity in Izmir, said the authorities had stepped up operations after the EU deal. "But our coast line is really long and gendarmerie forces are generally not enough to control the area," she said.

"Trafficking people became the most popular industry in the region", she added, along with producing life jackets and boats.

Turkish officials have said dozens of suspected ringleaders of human trafficking networks have been arrested. The government said it is trying to reduce illegal immigration by giving work permits to Syrians, who represent the biggest share of those heading to Europe.
Last Update: Jan 14, 2016 7:45 pm
RELATED TOPICS