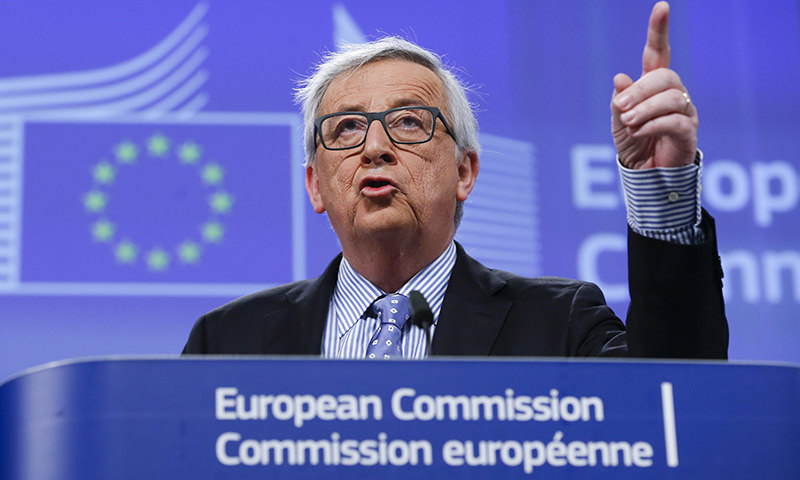 European Commission President Jean-Claude Juncker gestures as he speaks to the media during his first 2016 news conference on the agenda of the EU institutions at the European Commission in Brussels (EPA Photo)
by Daily Sabah with DPA Jan 15, 2016 12:00 am
Italian Prime Minister Matteo Renzi should stop gratuitously criticizing the European Union, one of the bloc's top officials said Friday, amid mounting tensions between Rome and Brussels over Europe's refugee crisis.

Italy is hampering 3 billion euros (3.3 billion dollars) in refugee aid promised to Turkey, EU diplomats told dpa on the condition of remaining anonymous. European Commission President Jean-Claude Juncker did not deny the claim when asked about the issue at a press conference in Brussels.

Juncker cannot understand the "surprizing Italian reticence when it comes to the co-financing of Syrian refugees in Turkey." Providing the funds for the refugees was also a question of European credibility, he argued.

The EU has struggled to maintain a united front in its response to the hundreds of thousands of migrants and refugees who have set course for the bloc.

Juncker went on to say that the "mood between Italy and the rest of the EU, and the commission in particular is not the best ever." He criticized Renzi for "vilifying and criticizing the commission on every street corner."

"I don't understand why he is doing this," the chief of the EU's executive added. "Italy, to be honest, should not criticize the commission too much. I accept all criticism, that's not the problem, but it should be justified."

He also accused Renzi, who has been in power for almost two years and is among Europe's youngest leaders, of falsely claiming responsibility for measures introduced by Juncker - one of the EU's longest-serving politicians.

"I would like us to stick to reality and the truth," Juncker said. "The commission is being insulted. I grin and bear it, I put my resentment and my irritation - which is significant - in my pocket. But people should stop thinking that I'm naive. I am not."

The commission chief said he now plans to travel to Italy at the end of February, noting that Renzi has complained that Juncker has not visited Italy since taking office as commission chief in November 2014.

"We have to resolve this thing with the Italians," Juncker said.

In November, the European Union and Turkey have agreed on a 3 billion euro aid deal for Syrian refugees in Turkey.

Turkey is one of the neighburs most affected by the 5-year-old civil war in Syria, having hosted 2 million refugees.

Refugees generally travel to Greece, then Macedonia, Serbia, Croatia and Slovenia before heading to Austria and Germany, where most want to stay. The EU has been criticized for lacking a collaborative response to the crisis. The UNHCR encouraged EU countries to do more to share the burden of the international community in the refugee crisis