US military confirms 8 civilian deaths in 2014 airstrikes against Daesh in Syria, Iraq 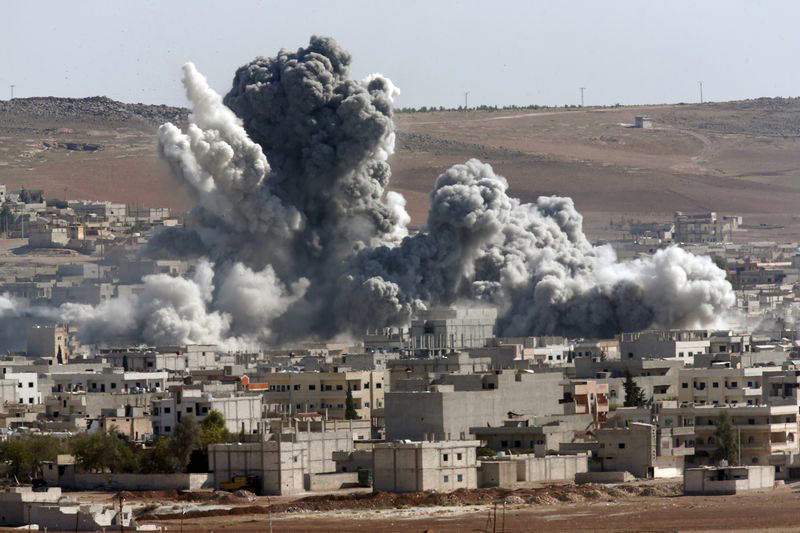 Smoke rises over Syrian town of Kobani after a US-led coalition airstrike, October, 2014. (AP Photo)
by Associated Press Jan 15, 2016 12:00 am
Eight civilians were killed and three others injured in five U.S.-led coalition airstrikes against Daesh militants last year in Iraq and Syria, according to investigations by the U.S. military's Central Command.

The investigations concluded that the strikes complied with the laws on armed conflict and that appropriate precautions were taken. The latest findings increase the number of U.S.-acknowledged civilian casualties to 14 dead and five injured since the airstrikes began in 2014.

Independent monitoring groups and activists have repeatedly said that coalition and other airstrikes have killed hundreds of civilians. Those complaints have escalated since Russian airstrikes began in Syria, with U.S. officials saying that Moscow's so-called dumb bombs were not as precise as coalition strikes and were killing citizens.

"We take extraordinary precautions to reduce the possibility of civilian casualties, but unfortunately in war, these things will happen," U.S. Army Col. Steve Warren, a military spokesman in Iraq, told The Associated Press. "In the few moments that the weapon is in the air, between aircraft and target, maybe a motorcycle will drive up or a car will drive up or someone will emerge that had previously been unseen and then tragedy happens."

In at least three of the five incidents reported Friday, the military said that civilians moved into the target zone after the coalition aircraft fired its weapon.

According to the report:

— Two civilians were killed on April 12, 2015, near Hawija, Iraq, during an airstrike on a Daesh unit

— Three civilians were killed on June 11, 2015, near Soluk, Syria, during strikes against a Daesh unit

— One civilian was injured on June 19, 2015, near Tall al-Adwaniyah, Syria, during an airstrike on two Daesh vehicles. The investigation said that the civilian moved into the target zone after the weapon was fired.

— Two civilians were injured on June 29, 2015, near Haditha, Iraq, during strikes against a Daesh unit and vehicles. The investigation said that "two seconds prior to impact" a car slowed down in front of the Daesh vehicles a motorcycle passed by. The report said there wasn't enough evidence to determine the level of injuries of the civilians.

— Three civilians were likely killed on July 4, 2015, near Raqqa, Syria, when a coalition airstrike targeted a high-value Daesh militant. The report said that a car and a motorcycle moved into the target zone after the weapon was fired.
Last Update: Jan 15, 2016 7:34 pm
RELATED TOPICS