With 32 deaths in past month, UNICEF confirms severe malnutrition in Syria's Madaya 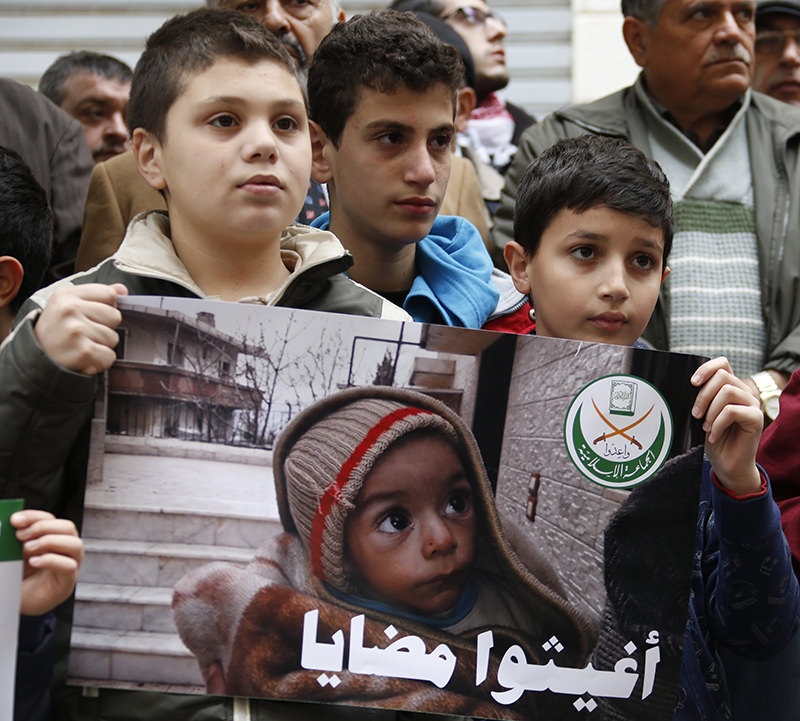 Children protest to save Madayans in front of the International Red Cross headquarters in Beirut, Lebanon. (EPA Photo)
by reuters Jan 15, 2016 12:00 am
The U.N. Children's Fund UNICEF on Friday confirmed cases of severe malnutrition among children in the besieged western Syrian town of Madaya, where local relief workers reported 32 deaths of starvation in the past month.

A mobile clinic and medical team of the Syrian Arab Red Crescent was on its way to Madaya after the government approved an urgent request, and a vaccination campaign is planned next week, the World Health Organization (WHO) said.

Two convoys of aid supplies were delivered this week to the town of 42,000 under a months-long blockade. The United Nations said another convoy was planned to Madaya, sealed off by pro-government forces, and rebel-besieged villages of al-Foua and Kefraya in Idlib next week, and that regular access was needed.

"UNICEF ... can confirm that cases of severe malnutrition were found among children," it said in a statement, after the United Nations and Red Cross had entered the town on Monday and Thursday to deliver aid for the first time since October.

UNICEF spokesman Christophe Boulierac told a news briefing in Geneva that UNICEF and WHO staff were able to screen 25 children under five and 22 of them showed signs of moderate to severe malnutrition. All were now receiving treatment.

A further 10 children aged from 6 to 18 were examined and six showed signs of severe malnutrition, he said.

UNICEF staff also witnessed the death of a severely malnourished 16-year-old boy in Madaya, while a 17-year-old boy in "life-threatening condition" and a pregnant women with obstructed labour need to be evacuated, Boulierac said.

Abeer Pamuk of the SOS Children's Villages charity said of the children she saw in Madaya: "They all looked pale and skinny. They could barely talk or walk. Their teeth are black, their gums are bleeding, and they have lots of health problems with their skin, hair, nails, teeth.

"They have basically been surviving on grass. Some families also reported having eaten cats," she said in a statement. "A lot of people were also giving their children sleeping pills, because the children could not stop crying from hunger, and their parents had nothing to feed them."

She said her agency was working to bring unaccompanied and separated children from Madaya to care centres in quieter areas just outside the capital Damascus.

The Britain-based Syrian Observatory for Human Rights said three people in critical condition were evacuated to a hospital in the city of Latakia, on Syria's government-controlled Mediterranean coast, from Kefraya and al-Foua on Friday.

World Food Programme (WFP) spokeswoman Bettina Luescher said that the local relief committee in Madaya had provided figures on the extent of starvation, but it could not verify them.

"Our nutritionist...was saying that it is clear that the nutritional situation is very bad, the adults look very emaciated. According to a member of the relief committee, 32 people have died of starvation in the last 30-day period."

Dozens of deaths from starvation have been reported by monitoring groups, local doctors, and aid agencies from Madaya.

U.N. Secretary-General Ban Ki-moon said on Thursday Syria's warring parties, particularly the government, were committing "atrocious acts" and he condemned the use of starvation as a weapon of war in the nearly five-year-old conflict.

The United Nations says there are some 450,000 people trapped in around 15 siege locations across Syria, including in areas controlled by the government, IDaesh militants and other insurgent groups.
Last Update: Jan 15, 2016 9:10 pm
RELATED TOPICS