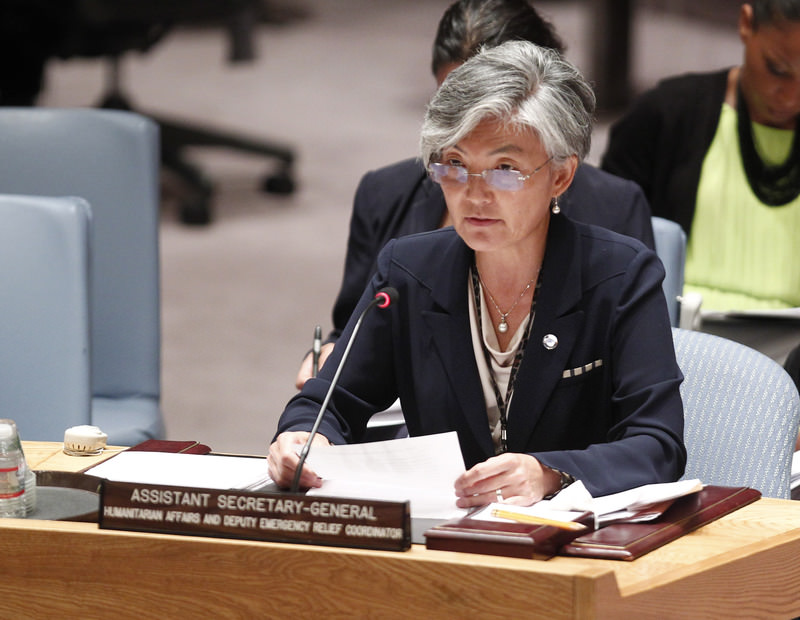 by Daily Sabah with AA Jan 16, 2016 12:00 am
Delivering humanitarian aid to Syria's besieged areas is not "bargaining chips or favors" that can be left at the mercy of warring parties, UN's deputy aid chief said on Friday, urging the Security Council to take action.

"Food, water and medicine are not bargaining chips or favors that the parties to a conflict can grant or deny at will; they are basic necessities that lie at the very essence of survival and the right to life, which this council and its members have a responsibility to protect," Kyung-wha Kang told the 15-member body. "You cannot let more people die under your watch," she added.

Her remarks came as aid workers with convoys of life-saving assistance to the besieged town of Madaya confirmed cases of severe malnutrition among the town's 42,000 desperate residents.

At least 32 people have starved to death in Madaya in the past month, the World Food Program said Friday.

The Assad regime supported by Russia and the Iran-backed Hezbollah militants have blocked access to the town for more than 200 days.

On Thursday, UN Secretary-General Ban Ki-moon accused the regime of committing war crimes by using starvation against the besieged town.

Kyung said approximately 400,000 people in Syria are trapped in areas besieged by the various parties to the conflict, with an estimated 4.5 million residing in areas "that are hard-to-reach, subject to various forms of restrictions on the movement of people and goods that severely limit their access to services and assistance".

The civil war, which will enter its sixth year in March, has left more than 250,000 people dead and turned the country into the world's largest source of refugees and displaced persons, according to the UN.
Last Update: Jan 16, 2016 1:36 am
RELATED TOPICS