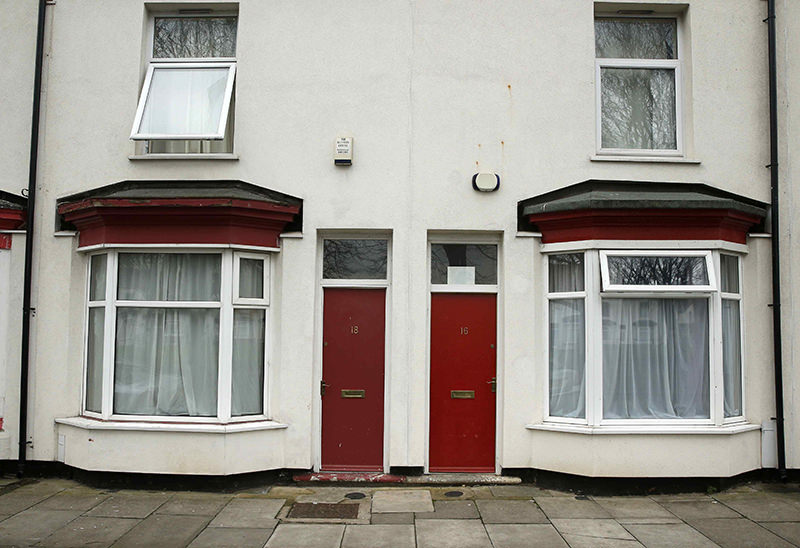 Painted red front doors are seen on a terraced street in the Gresham area of Middlesbrough, northern Britain, January 20, 2016. (REUTERS Photo)
by Associated Press
Jan 20, 2016 12:00 am
Britain ordered an investigation Wednesday into alleged discrimination against asylum-seekers amid reports that many homes being given them have red front doors that mark them out for abuse.

The Home Office is launching an inquiry after an investigation by the Times newspaper found that most public housing for asylum-seekers from Syria and Eastern Europe in the northeastern English town of Middlesbrough one of the poorest in England had red front doors.

The report quotes asylum-seekers in the town as complaining that the distinctive paint singles them out as easy targets of vandalism and racial abuse. Some were quoted as saying that eggs and rocks have been thrown at their houses.

In light of concerns raised, our subcontractor Jomast has agreed to repaint front doors in the area to address the issue

The security firm G4S and its subcontractor Jomast, which are paid by the government to provide housing for asylum-seekers, deny they have a discriminatory policy. They said most of Jomast's housing stock do feature red doors but that applies to both private and asylum housing.

"It is ludicrous to suggest that this constitutes any form of discrimination, and offensive to make comparisons to a policy of apartheid in Nazi Germany," Jomast said in a statement.

But it agreed that the doors will be repainted so "there is no predominant color."