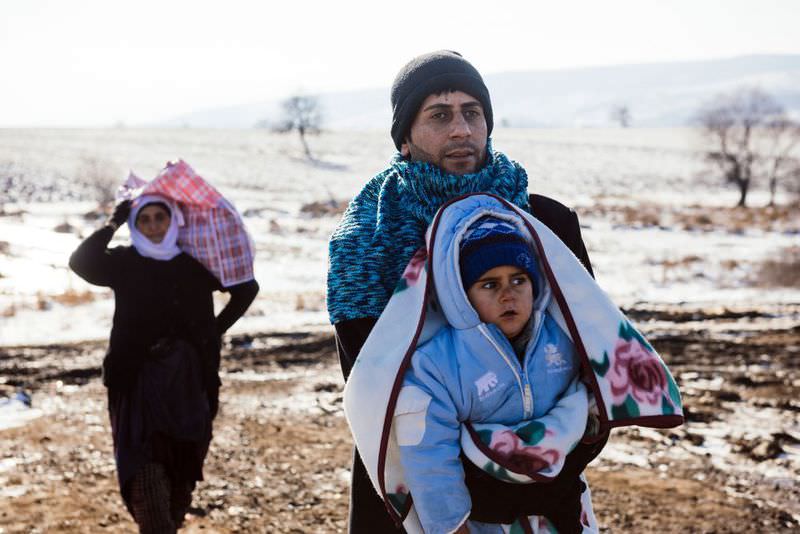 A man carries his child as they walk with other migrants after crossing the Macedonian border into Serbia near the village of Miratovac.
by Daily Sabah with Wires
Jan 21, 2016 12:00 am

As migrants continue to arrive in Europe, rights groups warn that child refugees are at serious risk from the bitterly cold Balkan weather and the world needs to find new, comprehensive ways to tackle the crisis

The refugee crisis is "here to stay" and the world needs to find new ways to deal with it, David Miliband, former British foreign minister and head of humanitarian relief group the International Rescue Committee (IRC), said on Tuesday.

He said the nature of global crises and prolonged instability in many regions meant that refugees often remained in host countries for many years. "The old model of help for refugees, which is that you've got short term social service and that came from the international community and when the war was over you went home, that's broken down because the average refugee is out of their own country for 17 years," Miliband said at an event in London.

Miliband criticized the response of European governments, which he said started playing catch-up when more than half a million refugees arrived in Germany by the middle of last year. "It's 10 times harder or a 100 times harder to solve a problem if you start late," Miliband said.

He said the world needed to do more to resettle refugees and offer greater help to Syria's neighbors, which are hosting more than 4 million people who have fled Syria. "At the moment in countries like Jordan and Lebanon the World Bank isn't allowed to be active because they're classified as middle income countries," Miliband said. He said the EU's fund for refugees in Turkey should be extended to Jordan and Lebanon and refugees should be allowed to work in the countries hosting them. This would help to stem the flow of refugees to Europe, he said.

Meanwhile, leading children's charities warned Tuesday that young refugees are at serious risk from the bitterly cold Balkan weather, as figures showed 31,000 migrants have arrived in Greece already this year. The number landing on Greek shores so far this month is 21 times higher than for all of January 2015, the International Organisation for Migration said.

As refugees continued to flow from Greece through the Balkans on their way to western Europe, aid workers sounded alarms over inadequate shelter from the current freezing temperatures and snowy conditions, particularly for children. "It's an absolutely desperate situation," Valentina Bollenback, a spokeswoman for Save the Children, told AFP by telephone from southern Serbia near the Macedonian border, where the ground is currently covered with about six inches of snow.

She said refugees were forced to trudge for two kilometers to cross the border into Serbia. They then travel to the Presevo registration center, where, despite heated tents, she had seen shivering children with chattering teeth and blue lips. "There's an increasing risk of hypothermia, pneumonia, and other life-threatening illnesses," Bollenback told AFP.

"The recent sub-zero temperatures and sometimes snowy conditions (are) exacerbating the children's poor physical condition as many children on the move do not have adequate clothing, or access to age-appropriate nutrition," the statement added. "This has been worsened by the lack of shelter and inadequate heating in some reception centers as well as buses and trains."

Nearly 7,000 refugees entered the Presevo reception center from Friday to Monday, according to Mirjana Milenkovski, a spokeswoman for the U.N. refugee agency in Serbia, who said the situation was "under control." But Austria's plans to take a tougher line on migrants, with its army set to start thorough identity checks Wednesday and a mesh fence nearly completed at its main border crossing with Slovenia, could cause a bottleneck and tighter controls further down the migrant trail.

Austria has also signaled that it would follow neighboring Germany's lead and begin turning back any new arrivals seeking to claim asylum in Scandinavia.

Relief agency Doctors Without Borders (MSF) on Tuesday denounced the European Union's "catastrophic failure" to help the waves of asylum seekers, demanding that safe transit corridors be provided for them.

More than 1 million refugees and migrants came to the European Union in 2015, half of them Syrians fleeing civil war in an attempt to seek security and shelter in a more prosperous and peaceful country, such as one in Europe. However, Europe has been slammed for lacking a collaborative response to the crisis. Compared to Syria's neighboring countries, the U.N. refugee agency encouraged European countries to do more to share the burden of the international community in the migrant crisis. Turkey is the country hosting the most refugees in the world with 2 million refugees in the country. Jordan hosts more than 630,000 Syrian refugees while Lebanon hosts more than 1 million.