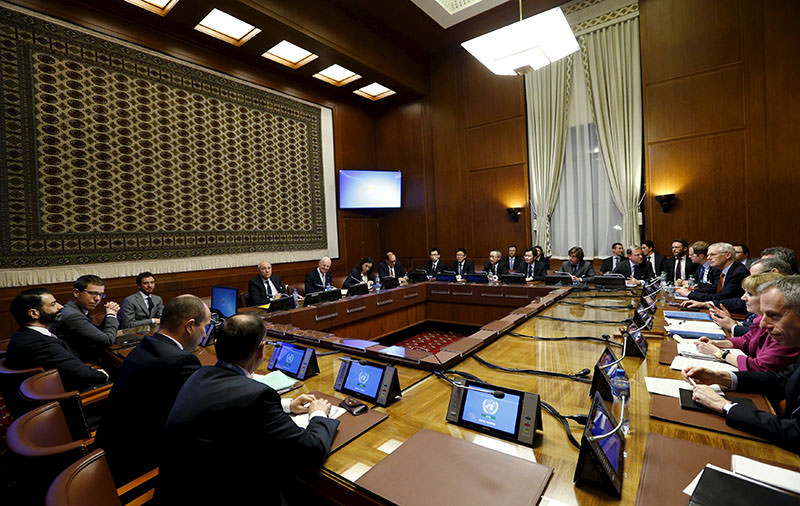 General view of UN Special Envoy for Syria Staffan de Mistura attending meeting on Syria with representatives of 5 permanent members of Security Council (P5) (Reuters)
by Compiled from Wire Services
Jan 25, 2016 12:00 am
Peace talks between the warring parties in Syria, which were scheduled to open Monday, will begin in Geneva on January 29 and will last for six months, the UN's Syria envoy Staffan de Mistura said.

De Mistura told reporters that the start date was pushed back because of a "stalemate" over the make up of the delegations, but that the invitations to the delegates were expected to be sent out on Tuesday.

"We are going to aim at proximity talks starting on the 29th and ongoing for six months" De Mistura said.

De Mistura said the priorities would be creating a broad cease-fire, stopping the threat from the Daesh group, and clearing the way for humanitarian aid. The UN envoy said the talks were expected to cover governance, constitutional review and future elections.

"We want to make sure that when and if we start, to start at least on the right foot," he said. "It will be uphill anyway."

The Geneva talks are the first since discussions collapsed two years ago.

Separately, Turkish Foreign Minister Mevlüt Çavuşoğlu said on Monday that efforts to include terror groups like the YPG militia among the opposition in Syrian peace talks was very dangerous and would undermine the process.

But European Union foreign policy chief Federica Mogherini, who spoke to reporters alongside Çavuşoğlu, said that, "from the European perspective, we attach an extremely high value on the fact that the process in Geneva will be inclusive."
Last Update: Jan 25, 2016 4:59 pm