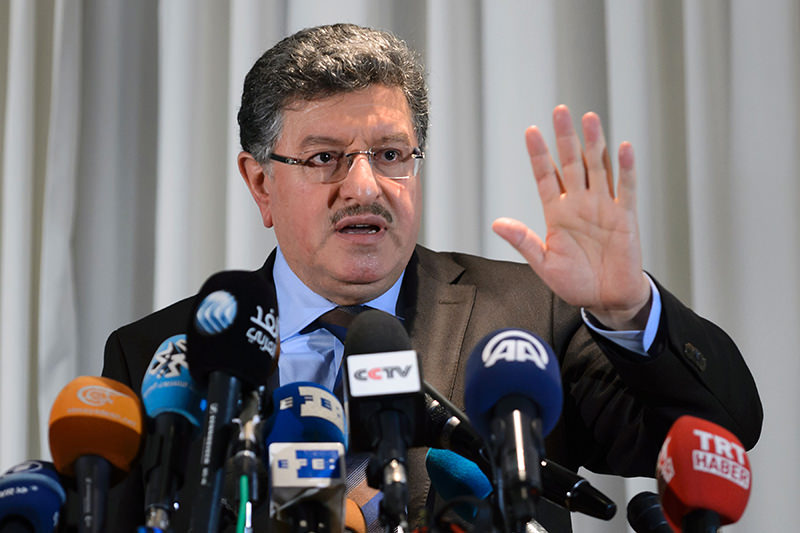 "Russian regime will create a new Hitler. We are suffering from a Hitler in Syria," said High Negotiations Committee spokesman Salem al-Meslet after the group's first formal talks with UN envoy Staffan de Mistura in Geneva.

Farah Atassi, a member of the opposition coalition known as the High Negotiations Committee, also said Monday that the top priority in the Geneva talks should be to stop the "unprecedented bombardment by the Syrian regime" of rebel-held suburbs of the Syrian capital Damascus.

The meeting coincided with a sharp spike in violence on the ground in Syria, particularly in the rebel-held besieged town of Moadamiyeh southwest of Damascus, where opposition activists reported dozens of helicopter-dropped barrel bombs in the past few days.

The group arrived for a meeting with de Mistura at the U.N. offices in Geneva on Monday. But his spokeswoman, Khawla Mattar, said indirect talks between the two sides were unlikely before Tuesday. De Mistura rescheduled a planned meeting with the government delegation Monday morning because he wanted to hold an official meeting with the opposition before launching indirect talks.

The talks in Geneva are aimed at ending a five-year conflict that has killed 250,000 people and displaced millions, leaving vast swaths of the country in ruins. They have been slow in starting, largely because of disputes over which opposition groups can take part and opposition demands that the government allow aid into besieged rebel-held areas and halt its bombardments of civilians before the talks start.

"We have come to Geneva to seek relief for our people by insisting U.N. Security Council resolution 2254 is implemented, which means humanitarian relief, the lifting of sieges, and the end of attacks on civilians," spokesman Salem al-Mislet said in a statement.

The talks in Geneva are part of a process outlined in last month's U.N. resolution that envisions an 18-month timetable for a political transition in Syria, including the drafting of a new constitution and elections.

But as the Geneva talks sputtered, the violence on the ground continued with activists reporting a dramatic spike in Syrian and Russian attacks on rebel-held areas.

In northwest Syria, advances by government forces and allied militia fighters over the weekend sent more than 3,000 people, many of them ethnic Turkmen, fleeing over the border to Turkey.

Turkish Deputy Prime Minister Yalçın Akdoğan said through his Twitter account Sunday evening that Turkey had taken in 2,502 Turkmen and Arab refugees fleeing "bombings of the Syrian regime and its collaborator Russia" in the past three days. He tweeted a few hours later that the numbers had reached 3,120.

"We will continue to side with and to open our arms to the Turkmen and all other oppressed people," Akdoğan said.

A sustained assault against opposition-held territory in Latakia province has brought the Syrian government and its Russian ally into open conflict with the Turkish government.

In Moadamiyeh near Damascus, activists reported a sustained, relentless campaign of barrel bombs by the Syrian army.

The Syrian Observatory for Human Rights reported an average of around 60 barrel bombs falling on Moadamiyeh every day for the past three days. The town is located about 10 kilometers (6.2 miles) southwest of Damascus.

Ahmad Moadamani, an opposition media activist in the town, said helicopters dropped 10 barrel bombs in the span of few minutes on the southeast front of the town on Sunday evening.

He said 97 people, among them civilians, militants, and civil defense personnel, who arrived after the attack, suffered injuries.

"Most of them suffocated," he said. He said the pattern of injuries pointed to some sort of gas attack although he acknowledged they have no way of knowing for sure what it was.

Moadamiyeh was the first major Syrian town to enter into a truce with the Syrian government in late 2014 after enduring a suffocating months-long siege during which the military pounded the community with artillery and airstrikes and refused to allow in food, medicine and fuel.

The U.N. human rights chief, Zeid Raad al-Hussein, meanwhile told reporters in Geneva he hopes that peace talks "will lead to the end of all these horrific abuses human rights abuses and violations of international humanitarian law that we are all too familiar with."

Al-Hussein added that the U.N. has a principled position that "no amnesties should be considered" for those suspected of having committed crimes against humanity or war crimes.