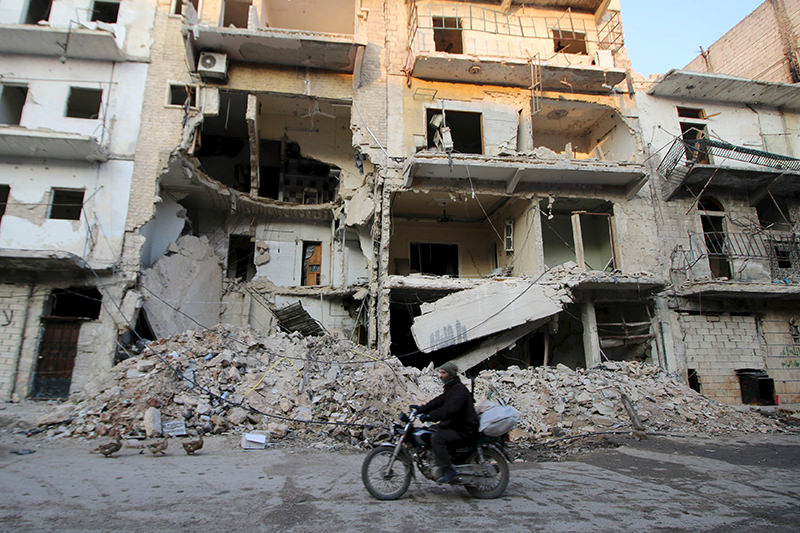 A man rides a motorcycle past damaged buildings in al-Myassar neighborhood of Aleppo, Syria January 31, 2016. (REUTERS Photo)
by Daily Sabah with AA Feb 01, 2016 12:00 am
As fear among locals grows, the latest death toll in Russian air strikes in Syria reached four with over 60 civilians injured, in a series of bombings on Monday in the war-torn country's northern Aleppo province.

Civil Defense units in the city of Anadan (roughly 12 kilometers from the city of Aleppo), where the attacks took place, told Anadolu Agency that Russian warplanes had carried out a total of 20 airstrikes in the area.

Mohamed Kurab, an activist based in Anadan, told Anadolu Agency that, following the attacks, Civil Defense units had to pull the bodies of the dead and injured from the rubble of destroyed buildings.

According to Kurab, local residents in northern Aleppo are afraid to go out due to ongoing Russian airstrikes.

Russia began its air campaign in Syria last September with the stated aim of degrading the Daesh militant group.

Critics, however, have accused the Kremlin of supporting the regime of Bashar al-Assad by targeting moderate Syrian opposition groups.

In recent months, Russia has carried out numerous airstrikes in the Syrian cities of Idlib, Aleppo, Hama and Homs -- which often result in civilian casualties -- and in rural areas such as Latakia, Daraa and southern Damascus.