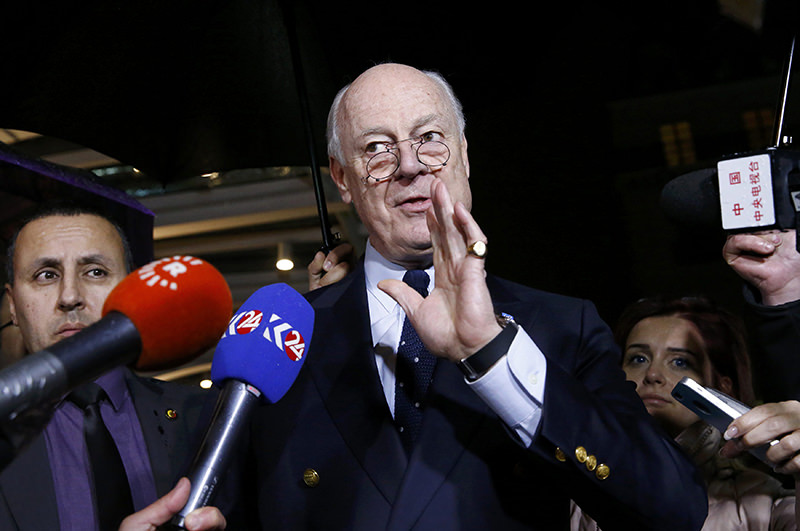 U.N. mediator for Syria Staffan de Mistura outside President Wilson hotel in Geneva, Switzerland February 3, 2016. (REUTERS Photo)
by Feb 03, 2016 12:00 am
The UN special envoy for Syria announced on Wednesday a "temporary pause" until February 25 of troubled talks in Switzerland aimed at ending the civil war.

"There's more work to be done," Staffan de Mistura told reporters in Geneva after several days of fruitless talks aimed at starting indirect negotiations between the Syrian regime and opposition.

"I have indicated from the first day I won't talk for the sake of talking," Mistura said.

"I therefore have taken the decision to bring a temporary pause (until February 25). It is not the end or the failure of the talks."

Shortly after Mistura's announcement, the Syrian opposition stated it will not return to Geneva if humanitarian conditions are not met.

The opposition called for aid to besieged cities, a halt to the bombardment of civilians and the release of thousands prisoners, including some children, languishing in the Assad regime's infamous jails.

The announcement came as Syrian troops, helped by days of Russian air sorties, cut the last supply route linking rebels in Aleppo to the Turkish border, in a major blow to the opposition.

Aleppo, Syria's pre-war commercial capital, has been divided between Assad supporters in the west and rebels in the east since fighting erupted in the northern city in mid-2012.

Assad's forces backed by Lebanon's Hezbollah and other militias encircled Aleppo from the west, south and east, and have advanced from the north since last week.

In addition to losing their lifeline from Turkey, which supports Syrian rebels, the opposition forces are now threatened in parts of Aleppo that they have held for three years.

On Wednesday, the army broke a three-year rebel siege of two government-held villages and took control of parts of the supply route, the Syrian military source told AFP.

"The regime forces have done in three days in Aleppo what they had failed to do in three years, thanks mainly to Russian support," said Rami Abdel Rahman of British-based monitoring group the Syrian Observatory for Human Rights.

The offensive is one of several the government has launched since President Vladimir Putin threw Russia's military might behind Assad, adding to support from Iran, on September 30.

"Russian air strikes will not cease until we truly defeat the terrorist organisations ISIL and Jabhat al-Nusra," Russian agencies quoted Lavrov as saying in Oman.

He was referring to Daesh, the extremist outfit which has overrun swathes of Syria and Iraq and claimed bombings and shootings worldwide, and to Al-Qaeda's Syrian branch.

The opposition -- and Western countries -- says the Russian strikes have almost entirely targeted other rebel groups, many of them backed by the West, Gulf states and Turkey.

Since the conflict began in March 2011, more than 260,000 people have died and more than half of Syria's population have fled their homes -- many heading to Europe, creating a political headache there.

In addition, the tangled conflict has ruined the economy and dragged in a range of international players.

The United Nations said last month that an estimated 486,700 people in Syria were living under siege, more than half of them under government blockade, among 4.6 million people in so-called "hard-to-reach" areas.

World leaders will gather in London on Thursday for a donor conference to try to raise $9 billion (8.3 billion euros) to help Syrians and neighbouring countries affected by the crisis.

Doomed from the start?

The regime's new gains on the ground helped undermine de Mistura's efforts in recent days to coax the warring sides into six months of indirect peace talks, set out in a November roadmap proposed by outside powers.

But problems had beset the Geneva gathering from the outset.

The HNC was also outraged that as peace talks were due to start in Geneva, a major offensive was happening on the ground.

The government delegation meanwhile complained that the HNC was disorganised, had not named its negotiators and contained individuals it considered "terrorists".

One such figure is Mohammed Alloush, a leading member of rebel group the Army of Islam and nominally the HNC's chief negotiator, who arrived in Geneva late on Monday.

"The problem is with the criminal regime that decimates children and with Russia which always tries to stand alongside criminals," he said, clutching a photo of a young boy he said was hurt by Russian air strikes.

The next step is for the International Syria Support Group (ISSG) of outside countries to convene, potentially on February 11 in Munich, Germany.
Last Update: Feb 03, 2016 10:54 pm
RELATED TOPICS