World pledges record $10B for Syrians, but peace prospects grim 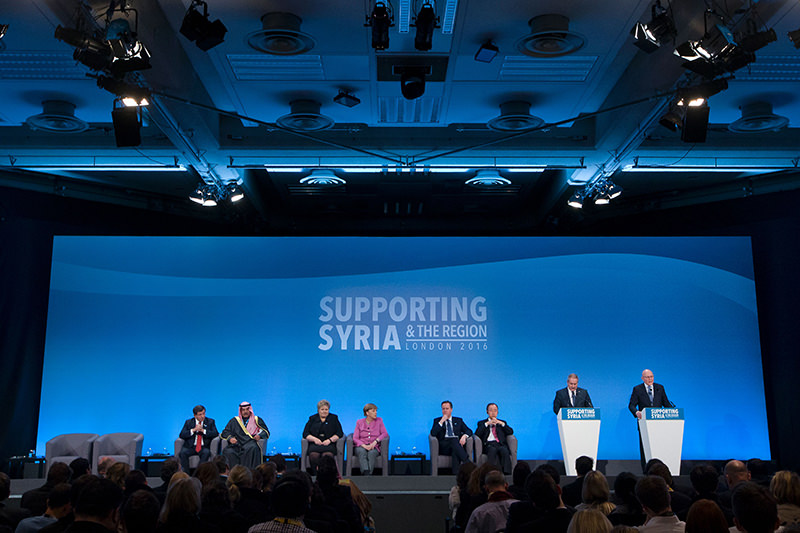 The Syria donors' conference in London raised over $10 billion for humanitarian aid. (AFP Photo)
by Associated Press
Feb 04, 2016 12:00 am
World leaders pledged more than $10 billion Thursday to help fund schools, shelter and jobs for refugees from Syria's civil war, money that British Prime Minister David Cameron said "will save lives, will give hope, will give people the chance of a future."

But participants at the aid conference in London acknowledged that prospects for ending the conflict have rarely been worse: Peace talks are suspended, fighting is intensifying, Russia and the West are at odds, and millions of Syrians are suffering from bombardment, homelessness and hunger.

"The situation in Syria is as close to hell as we are likely to find on this Earth," said United Nations Secretary-General Ban Ki-moon.

U.S. Secretary of State John Kerry was no more upbeat.

"After almost five years of fighting, it's pretty incredible that as we come here in London in 2016, the situation on the ground is actually worse," he said.

The one-day meeting, held under tight security at a conference center near Parliament, aspired to bring new urgency to the effort to help the 4.6 million Syrians who have sought refuge in neighboring countries including Jordan, Lebanon and Turkey. Another 6 million people or more are displaced within Syria, and a quarter of a million have been killed.

Previous calls for international donations have come up short, and the five-year war has driven a chaotic exodus of hundreds of thousands of desperate refugees to Europe. Thursday's pledges are intended to slow that migration, by creating school places and secure jobs for Syrian refugees in the Middle East, and economic support for the overburdened host nations.

Cameron said participants had pledged almost $6 billion for 2016, and another $5 billion by 2020.

The British leader called the conference - hosted by Britain, Germany, Norway, Kuwait and the U.N. - "a real breakthrough, not just in terms of money but in terms of how we handle these refugee crises."

The tally falls short of the $9 billion the U.N. and regional countries said was needed for 2016 alone, but it was a significant improvement on half-hearted previous fundraising efforts. Last year's conference, in Kuwait, raised just half its $7 billion target, forcing cuts to programs such as refugee food aid.

Aid groups welcomed the money, but slammed the international community for allowing the war to go on. Peter Maurer, president of the International Committee of the Red Cross, said the world had shown a "lack of political action and ambition to resolve the crisis."

"Humanitarian aid is always just a quick fix, and never enough," he said.

Cameron told reporters that the international community would stand with Syrians for "as long as it takes to secure peace," acknowledging that the goals of a cease-fire followed by a transitional government remained distant.

Thursday's meeting opened hours after the latest U.N.-led bid to start peace talks in Geneva was suspended for three weeks - a sign of major difficulties.

Kerry blamed Syria's government and Russia for the peace talks stalling. He said he and Russian Foreign Minister Sergey Lavrov had spoken by phone Thursday and agreed to continue discussing "how to implement the cease-fire." Russia's Foreign Ministry said the two had also agreed to try to ensure the pause in the talks was as short as possible.

Neither statement mentioned any concrete measures.

Russia gave the conference a cool reception, declining to send President Vladimir Putin or a senior minister to the event, attended by 30 heads of government or heads of state. Russia was represented by its ambassador to London, Alexander Yakovenko.

The Syrian government, backed by Russian airstrikes, has increased the pace of attacks on opposition forces in recent days as the talks faltered.

The U.N.'s Ban told the conference it was "deeply disturbing that the initial steps of the talks have been undermined by the continuous lack of sufficient humanitarian access, and by a sudden increase of aerial bombing and military activities within Syria."

He said that "the coming days should be used to get back to the table, not to secure more gains on the battlefield."

Aid workers warn of a "lost generation" of Syrians if some 700,000 refugee children who are not attending school don't get an education.

Education campaigner Malala Yusafzai and 17-year-old Syrian refugee Mezon al-Melihan met with Cameron and other leaders to press for $1.4 billion for education for children in Syria and its neighbors.

"Without education, who will bring peace?" al-Melihan said.

Donor countries also want to see the refugees employed on infrastructure projects - which would also benefit the host nations - or in special business zones where Syrians and local people can work side by side.

In return for opening up their economies to the newcomers, host countries are promised loans from international financial institutions and more access to European markets. Cameron said the move would create 1 million jobs in the region, "for refugees and residents alike."

Syria's neighbors had warned the conference that the burden of so many newcomers was becoming intolerable. Jordan's King Abdullah said his country housed almost 1.3 million Syrian refugees, a fifth of Jordan's population. The Jordanian figure includes all Syrians in the country; the U.N. says it has registered 630,000 Syrian refugees in Jordan.

"We have reached our limit," the king said. "Our country will continue to do what we can do to help those in need, but it cannot be at the expense of our own people's welfare."

The exodus from Syria shows no signs of ending. Prime Minister Ahmet Davutoğlu told the conference that 10,000 Syrians who have fled bombing in the city of Aleppo are waiting at the Turkish border, and as many as 70,000 others are on the way. Amateur video showed thousands, including women and children, running with their belongings toward the frontier.

Turkey has taken in more than 2.5 million Syrians since the war began in 2011.

More than 70 countries were represented at the conference, but there were few Syrians. Neither President Bashar Assad's government nor opposition groups participated.

In Jordan's Zaatari refugee camp, home to 79,000 Syrians, some agreed with conference organizers that the best future for refugees was in their home region.

"We don't want to go to ... foreign countries," said Abu Khaled al-Nassar, a refugee from the southern town of Daraa. "With all my respect to these countries, the traditions are different, and we live here in an Arab country, Jordan. We understand each other.

"So we call on the donor countries to support us with investments in order to find jobs. We don't want to go to Europe - we will stay here, work and produce."
Last Update: Feb 05, 2016 4:45 pm