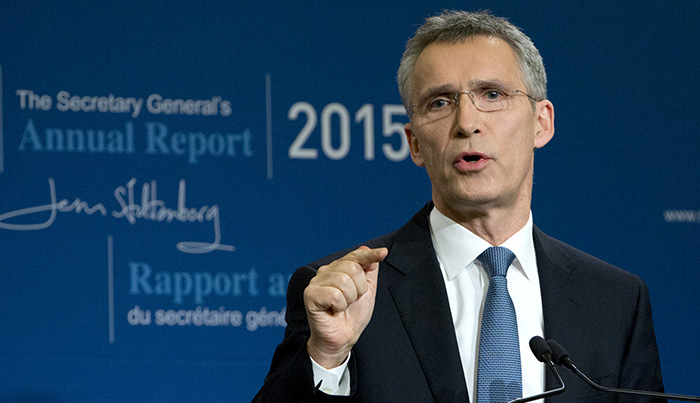 NATO Secretary General Jens Stoltenberg speaks during a media conference as he presents the NATO annual report in Brussels on Thursday, Jan. 28, 2016 (AP Photo)
by Daily Sabah with Reuters Feb 05, 2016 12:00 am
Russia's recent intensification of air strikes agains the moderate opposition groups in Syria is damaging to peace talks in Geneva that the U.S.-alliance strongly supports, NATO Secretary-General Jens Stoltenberg said on Friday.

"The intense Russia air strikes, mainly targeting opposition groups in Syria, is undermining the efforts to find a political solution to the conflict," Stoltenberg told reporters as he arrived for an EU defence ministers meeting in Amsterdam.

"The increased Russia presence, the air activity in Syria, is also causing increased tensions and violations of Turkish airspace ... violations of NATO airspace," he said. "This creates risks."

Backed by Russian assaults, the Syrian army and its allies made significant advances against insurgents in the northern province of Aleppo in recent days.