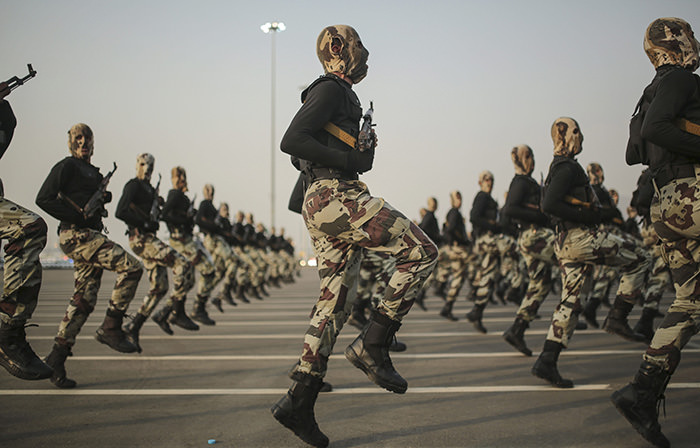 Saudi security forces take part in a military parade (AP Photo)
by Anadolu Agency Feb 05, 2016 12:00 am
The U.S. defense chief Thursday welcomed reports about Saudi Arabia's willingness to deploy troops in Syria, noting that he would discuss the issue with his Saudi counterpart in Brussels next week.

During an interview with al-Arabiya TV on Thursday, Saudi military spokesman Brig. Gen. Ahmed al-Asiri said Riyadh "is ready to participate in any ground operations that the coalition may agree to carry out in Syria."

"That kind of news is very welcome. I look forward to discussing that with the Saudi defense minister next week – that and other kinds of contributions that Saudi Arabia can make," Secretary of Defense Ash Carter told reporters at Nellis Air Force Base, Nevada.

Carter is going to meet defense ministers of 26 countries, which are part of the U.S.-led coalition countering Daesh in Belgian capital Brussels.

The U.S. defense chief acknowledged that the Saudi government has indicated willingness to do more in the fight against Daesh.

"I should mention also Saudi Arabia has indicated a willingness to take the lead in marshaling some Muslim-majority countries," he said, noting that the Saudi government would contribute to the fight against Daesh significantly.

Carter said that the Netherlands also pledged to support anti-Daesh operations in Syria last week, in addition to the Dutch government's existing contributions to the campaign in Iraq.

"You see others stepping up, and the reason why I'm going to Brussels next week is to bring the full weight of the coalition behind accelerating the defeat of ISIL [Daesh]," Carter said.
Last Update: Feb 05, 2016 8:16 pm
RELATED TOPICS