Russia has to stop bombing women, children in Syria: Kerry 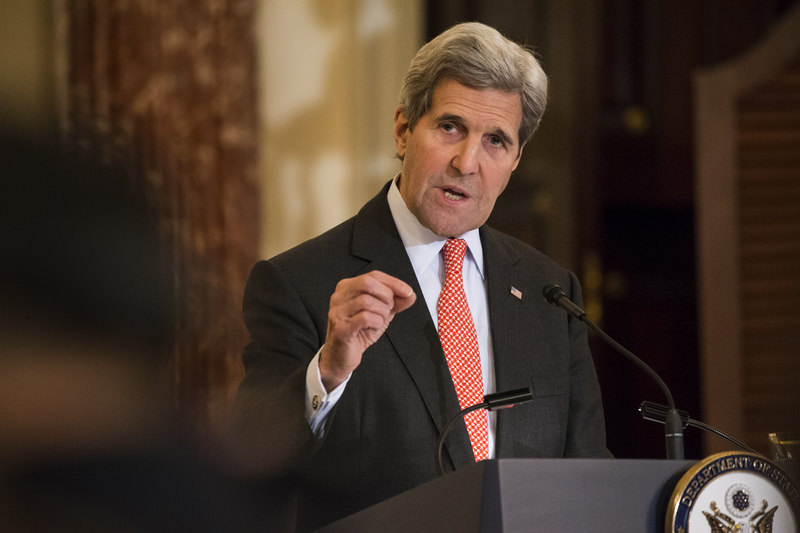 by Feb 06, 2016 12:00 am
US Secretary of State John Kerry urged Russia Friday to implement a ceasefire in Syria, saying its bombing campaign was killing women and children in large numbers and "has to stop."

"Russia has indicated to me very directly they are prepared to do a ceasefire," Kerry told reporters, fresh from a trip to Europe focused on resolving the five-year Syrian conflict. "The Iranians confirmed in London just a day and a half ago they will support a ceasefire now."

"We will have a much better sense in the next few days of how serious each party is," added Kerry, a day after he implicitly blamed Russia's bombing campaign against the Syrian opposition for the collapse of peace talks in Geneva this week.

Moscow, Damascus's main ally, has stepped up bombing around the Syrian city of Aleppo in recent days, facilitating a government offensive that has forced tens of thousands of civilians to flee to the Turkish border.

"They are not precision bombs, and there are civilians, including women and children, being killed in large numbers as a consequence," he said, during a joint news conference with Colombian President Juan Manuel Santos.

Russian planes are also targeting hospitals and returning to bomb people rescuing those wounded in earlier air strikes, he added.

"This has to stop", Kerry said.

"The Russians have made some constructive ideas about how a ceasefire in fact could be implemented," he added. "But if it's just talk for the sake of talk in order to continue the bombing, nobody is going to accept that."

Kerry's comments represent a clear shift in tone following a months-long attempt to cooperate with Russia over a way out of the Syrian crisis.

Washington has accused Moscow of being "partly" responsible for torpedoing peace talks in Geneva on Wednesday that had barely begun.

After meetings in Vienna and New York in late 2015, regional and global powers within the International Syria Support Group -- including Washington, Moscow, Riyadh and Tehran -- are to meet in Munich next week to discuss a ceasefire in a war that has killed some 260,000 people and generated millions of refugees.

The diplomatic process was set in motion in December by a UN Security Council resolution passed by its 15 members, including Moscow.
Last Update: Feb 06, 2016 7:31 pm
RELATED TOPICS