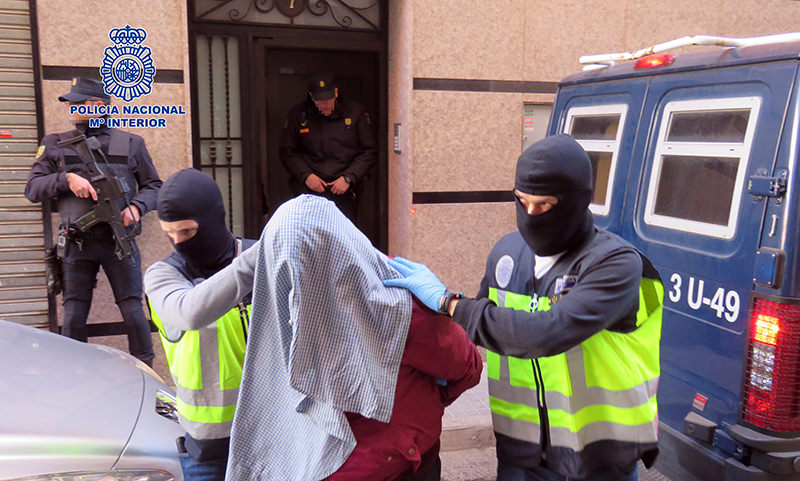 A handout picture released on February 7, 2016 by Spanish National Police shows masked police officers taking an arrested person at an undisclosed location. (AFP Photo)
by Anadolu Agency Feb 07, 2016 12:00 am
Spanish police have arrested seven people for links to an international terrorism cell which shipped arms, money, technology and materials to make explosives to terrorist organizations in Syria and Iraq under the guise of humanitarian aid, Spain's Interior Ministry said on Sunday.

This terrorist network provided logistical support to Daesh and al-Nusra in war zones "efficiently -- earning the full satisfaction of these terrorist organizations and receiving orders that were increasingly specialized," said a statement released by the Spanish Interior Ministry.

Of the seven arrested five were Spanish citizens of Syrian, Jordanian and Moroccan descent and two were residing in Spain but with Syrian and Moroccan nationalities. The network was spread through Spain and police nabbed suspects in the regions of Valencia and Alicante and in the Spanish enclave of Ceuta.

The Spanish police began the investigation of this "perfectly organized group" in 2014 and claim this they had previously been working in other European countries before finding its stable home in Spain.

"There was a centralized leader that directed all the activity through a business complex which permitted him, without raising any suspicions, to send material in closed containers from Spanish ports to terrorist groups in Syria and Iraq."

The group was also involved in money laundering, illegal financing and recruitment of women to wed fighters on the front lines.

The illegal financing and money transfers were overall done through the underground method called "Hawala", said Spanish police. The method involves transfers based on trust that leaves no paper trail.

As with most recruitment, said Spanish police, the group relied heavily on social networks.

This is the second batch of arrests of terrorists in Spain this year and police say this operation is still open. In 2015 and 2016, Spanish police arrested 82 people related to terrorist groups like Daesh, al-Qaeda and al-Nusra.
Last Update: Feb 07, 2016 9:41 pm
RELATED TOPICS