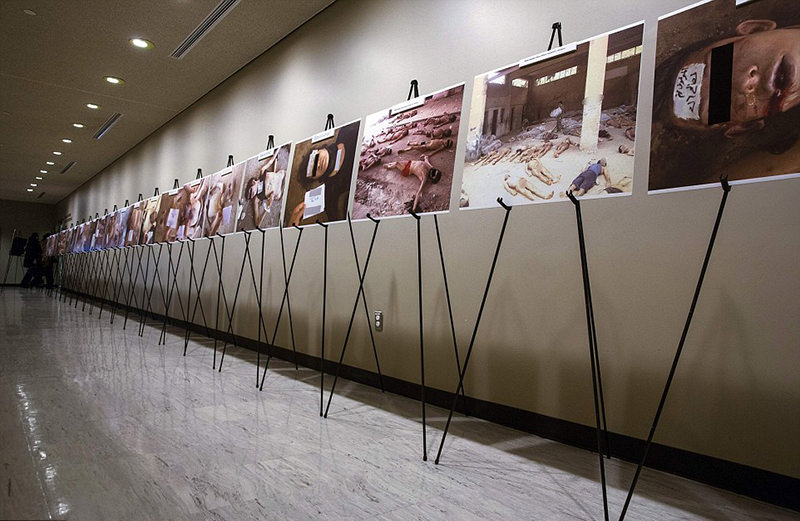 The traumatising images from Oct 2015 exposed the horror of Bashar Assad's Syrian regime, showing 'clear evidence' of systematic torture. (REUTERS Photo)
by French Press Agency - AFP
Feb 08, 2016 12:00 am
UN investigators accused the Syrian regime Monday of "extermination" in its jails and detention centres, saying prisoners have been executed, tortured to death or held in such horrific conditions that they perished.

Thousands of detainees have been killed while being held by different sides in Syria's brutal conflict since the violence began nearly five years ago, the UN commission of inquiry on Syria said in its latest report.

The report painted a particularly stark picture of prisons and detention centres run by the Syrian authorities.

"The mass scale of deaths of detainees suggests that the government of Syria is responsible for acts that amount to extermination as a crime against humanity," commission head Paulo Pinheiro told reporters in Geneva.

The report adds to a huge body of evidence from the commission and others, detailing horrific abuse, torture and killings in Syrian-run jails.

The so-called "Caesar Report" released in early 2014, for instance, contained some 55,000 photographs depicting the tortured and abused bodies of around 11,000 people it said had died in Syrian jails during the first two years of the conflict.

Monday's report, which stretches back to the beginning of the conflict in March 2011 and through last November, is based on 621 interviews, including with more than 200 former detainees who witnessed one or more deaths in custody.

The survivors had detailed how their cellmates were beaten to death during interrogation or in their cells, or left to die of severe injuries sustained from gruesome torture.

One witness described how an elderly man held at a military security branch in Homs had been severely beaten and then hung from his wrists from the ceiling.

"The guards burned his eyes with a cigarette and pierced his body with a heated, sharp metal object," the report said, adding that "after hanging in the same position for three hours, the man died."

Others died from lacking medical care and "inhuman living conditions", including severely overcrowded and unhygenic cells and lacking food and clean water, the report said, adding that many prisoners were forced to use their toilet as a source of drinking water.

"A high number of prisoners across detention facilities died of severe and continuing diarrhoea," it said, adding: "Victims often suffered for months before death occurred."

Most of the detainees known to have died are men, but women and children as young as seven have also perished while being held by the Syrian authorities, the report said.

Abuse, squalid conditions and a "high frequency" of deaths were consistent across places of detention and over time, and must have been condoned up the chain of command, it said.

"There are reasonable grounds to believe that high-ranking officers -- including the heads of branches and directorates -- commanding these detention facilities, those in charge of the military police, as well as their civilian superiors, knew of the vast number of deaths occurring in detention facilities," it said.

"Yet (they) did not take action to prevent abuse, investigate allegations or prosecute those responsible."

Damascus is not the only one abusing and killing detainees in Syria.

The report detailed horrific abuses carried out in makeshift detention centres run by Daesh, including massacres and executions of children.

The group, notorious for its brutal public executions by beheadings and throwing people off high buildings, has committed war crimes and crimes against humanity, the report said.

The commission, which has repeatedly called on the Security Council to refer the situation in Syria to the International Criminal Court, also called Monday for "targeted sanctions" against the people, agencies and groups suspected of being behind the violations.
Last Update: Feb 09, 2016 3:51 pm