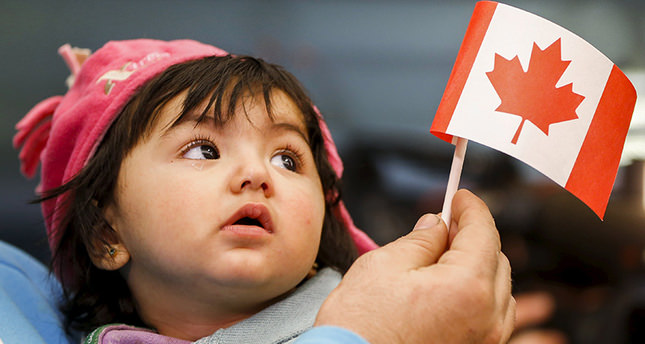 A young Syrian refugee looks up as her father holds her and a Canadian flag at the as they arrive at Pearson Toronto International Airport in Mississauga, Ontario (Reuters Photo)
by Daily Sabah Feb 09, 2016 12:00 am
Nearly 300 more Syrian refugees fled Turkey over the weekend as part of Canada's commitment to resettle 25,000 Syrians from the region, International Organization for Migration (IOM) Turkey announced on Tuesday.

The refugees left Turkey on a flight through the program facilitated by IOM in collaboration with Turkish and Canadian authorities, which now has totaled over 900.

"This is significant because it is one of the first organized, orderly movements of Syrians from Turkey. With over 2.5 million Syrians now living in Turkey - not to mention asylum seekers from other countries - the strain on humanitarian actors here has steadily increased," said IOM Turkey Chief of Mission Lado Gvilava.

"This year marks the fifth year of the conflict in Syria and funding is not coming through fast enough to meet the needs of this huge influx of people. We urgently need resources to address their immediate needs and to plan for their humanitarian transfer, resettlement or medium-term integration," he added.

Canadian authorities receive the refugees based on a selection program through interviewing the refugees and making decisions on their eligibility for admission into the country. If the refugees are found eligible, IOM facilitates their travel needs to ensure their safe arrival in Canada.

According to Turkish authorities, Turkey now hosts more than 2.7 million refugees within its borders, mostly refugees from Syrian who fled the civil war that has been ongoing for the past five years.

Recently, Russian and Syrian forces intensified their offensive on opposition-held areas around Aleppo that are still home to around 350,000 people and aid workers have said the city, Syria's largest before the war, could soon fall.

The Syrian Observatory for Human Rights, which monitors the war, said airstrikes thought to be from Russian planes hit around the villages of Bashkoy, Haritan and Kafr Hamra north of Aleppo on Sunday, the latter two lying near the road to Turkey.

Russia's intervention has tipped the balance of the war in favor of Syrian President Bashar Assad, reversing gains rebels made last year. Advances by the Syrian army and allied militias, including Iranian fighters, are threatening to cut off the rebel-held zones of Aleppo.

Some 35,000 civilians have arrived at Bab al-Salameh and the nearby Syrian town of Azaz, according to the U.N. Office for the Coordination of Humanitarian Affairs.
Last Update: Feb 09, 2016 8:39 pm
RELATED TOPICS