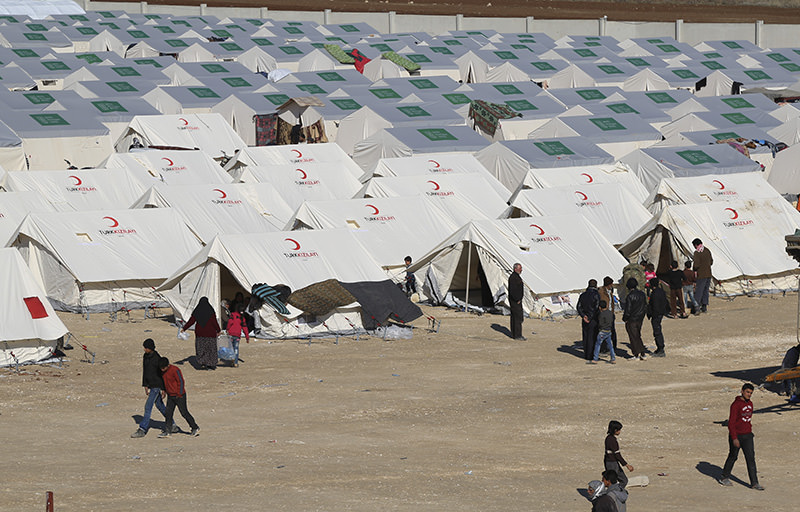 Displaced Syrians walk among a temporary refugee camp in northern Syria, near Bab al-Salameh border crossing with Turkey, Feb. 8, 2016. (AP)
by Compiled from Wire Services Feb 09, 2016 12:00 am
The health minister in Syria's interim government has backed Turkish plans for a safe zone for refugees in northern Syria.

Mohamed Wajih Juma spoke to Anadolu Agency at the Öncüpınar border crossing between Syria and Turkey's Kilis province, where tens of thousands of his compatriots have fled to escape a Russia-backed offensive in Aleppo.

"Building of a safe zone would be good for Syrians. We trust the policy of the Turkish government on this issue. Turkey is a party that sees and knows all sides of this issue. If a safe zone is built Syrians would have a place to be protected."

Turkey has long advocated the establishment of a safe zone for refugees across its southern border between Jarabulus on the western bank of the Euphrates river and Azaz after Daesh is removed from the territory.

Juma, a member of the Istanbul-based opposition administration, thanked Turkish aid agencies helping Syrians escaping from Aleppo and other parts of northern Syria.

Burak Karacaoğlu, an official with the Humanitarian Relief Foundation (IHH), said the organization had provided accommodation, heating and food for the refugees.

"In the last four days, when the migration wave started, we have distributed 10,000 blankets. We also erected 350 tents and supplied food for 30,000 people a day," he told Anadolu Agency.

But he said he feared a larger wave of desperate people as the offensive continues, despite pressure from around the world on the Syrian government and its Russian ally.

Syrian government forces have advanced around much of Aleppo city, virtually encircling the rebel-held eastern part, and prompting tens of thousands to flee their homes in the northern countryside.

They are now around 20 kilometres (12 miles) from the Turkish border.

"It's the first time since 2013 that the Syrian regime has been this close to the Turkish border in Aleppo province," said Rami Abdel Rahman, head of the Britain-based Syrian Observatory for Human Rights.

Turkey has said it fears the violence could drive up to 600,000 people to its border, in a "worst-case scenario."

The UN's aid chief Stephen O'Brien said he was "gravely concerned" by the mass displacement, noting that about 80 percent of the tens of thousands of people on the move were believed to be women and children.

"We have reports that civilians have been killed and injured, and that civilian infrastructure, including at least two hospitals, has been hit," he said in a statement.
Last Update: Feb 09, 2016 11:43 am
RELATED TOPICS