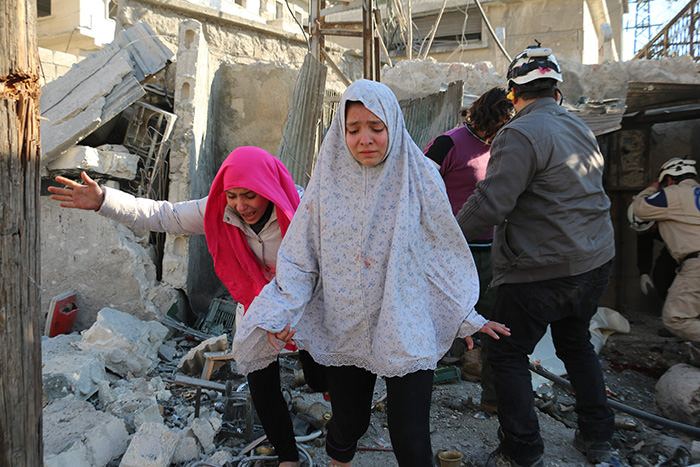 According to the sources, Russian warplanes targeted the villages of Kafr Kalbin and Kafr Khashir, both located in Aleppo's opposition-held Tel Rifaat district.

Abu Mahmoud, a member of a local coordination committee in Tel Rifaat, said Russia had carried out more than 20 airstrikes in the district and in neighboring villages on Tuesday.

"Russia is trying to ethnically cleanse the region by striking opposition-held areas of northern Aleppo in an effort to force local residents to flee," he said.

Abu Mahmoud went on to assert that Russia was targeting opposition-held areas north of Aleppo's Azaz district with the aim of helping Daesh while also striking areas southeast of Azaz to help the PYD, the terrorist PKK group's Syrian affiliate.

He also said clashes had recently taken place between Syrian opposition forces and the PYD in Aleppo's Menagh district and at the Menagh military airbase.

Also on Tuesday, Russian and Syrian warplanes struck targets in the southwestern province of Daraa, according to local sources.

The same sources said that Syrian and Russian warplanes had carried out airstrikes in different parts of the province, killing six civilians and injuring dozens of others, including two children.

Meanwhile, at least 500 people have been killed on all sides during fighting in Aleppo province since the start of a Syrian army and allied forces offensive began in early February, a war monitor said on Wednesday.

The Syrian Observatory for Human Rights, which monitors the war, said this figure included at least 100 civilians. Reuters could not independently confirm the figures.

Syria has remained locked in a vicious civil war since early 2011, when the regime of Bashar al-Assad cracked down on pro-democracy protests -- which had erupted as part of the "Arab Spring" uprisings -- with unexpected ferocity.

Since then, more than 250,000 people in the war-torn country have been killed and more than 10 million displaced, according to UN figures.
Last Update: Feb 24, 2016 7:40 pm
RELATED TOPICS