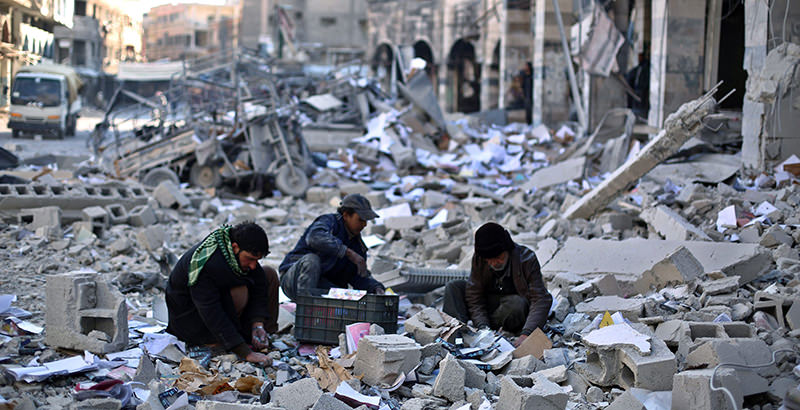 Meanwhile, a local religious authority in Homs announced the cancelation of Friday prayer in the northern countryside following the Russian airstrikes.

This is the third time that Friday prayer is cancelled in Hom's countryside since the Russian intervention in September 2015.

A report by the Syrian Center for Policy Research has said that 470,000 Syrians were killed and 1,900,000 injured in the country's civil war.

This is far above the UN's last death toll figure of 250,000, which stopped collecting statistics about the casualties of Syrian conflict 18 months ago.

While Russia claims its campaign is aimed primarily at the Daesh terrorist group, it has repeatedly targeted civilian areas and the moderate anti-regime opposition groups that control them.

Syria has remained locked in a vicious civil war since early 2011, when the Assad regime cracked down on pro-democracy protests -- which had erupted as part of the "Arab Spring" uprisings -- with unexpected ferocity.

Since then, more than 250,000 people in the war-torn country have been killed and more than 10 million displaced, according to UN figures.

AFP conducted an exclusive interview with Assad on Thursday at his office in Damascus. The interview was released on Friday afternoon by the agency, which reported Assad as saying that he rejected UN allegations of regime war crimes, describing them as "politicized" and lacking evidence.

Assad said his regime's eventual goal was to retake all of Syria, large swathes of which are under the control of opposition forces or the Daesh terrorist organization.

"Regardless of whether we can do that or not, this is a goal we are seeking to achieve without any hesitation," he said.

The interview with Assad is the first he has given since the effective collapse of a new round of peace talks in Geneva earlier this month.

Assad also voiced out his fears about Turkey's potential future actions regarding the Syrian crisis. Although Turkey does not have a military intervention on its agenda, Assad said that he saw such a risk, along with Saudi forces.
Last Update: Feb 12, 2016 6:27 pm
RELATED TOPICS