US concerned over potential YPG, moderate opposition clash in Syria 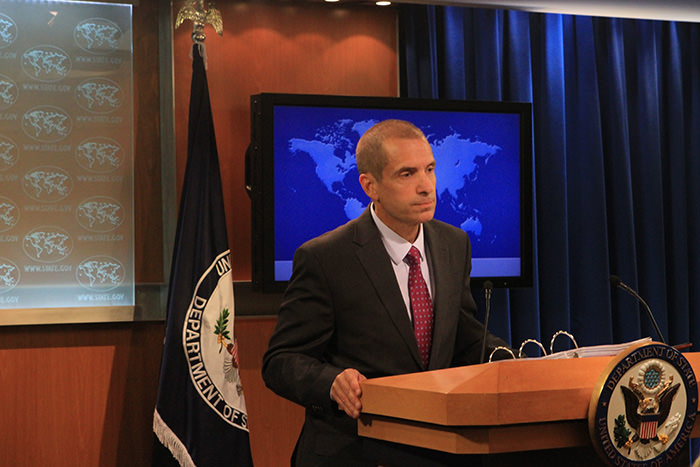 U.S. State Department Spokesperson Mark Toner (AA Photo)
by Daily Sabah with Agencies Feb 12, 2016 12:00 am
A potential clash between the YPG, the armed wing of the Democratic Union Party (PYD), and the United States-backed moderate opposition forces is a concern for the U.S., a State Department spokesperson said on Thursday.

The U.S. wants the YPG to focus on its fight against Daesh and "not involve themselves in other fighting in Syria", said State Department spokesman Mark Toner.

"We've expressed our concerns, frankly, when they come into conflict with opposition forces on the ground," Toner said.

"We feel that sets back the overall effort, what we're trying to achieve on the ground."

He added that the U.S. continues to urge the YPG to "administer inclusively on territory that they've liberated, protect local populations and property and promote and protect human rights."

Regarding ongoing talks by the International Syria Support Group in Munich, Germany, Toner said Secretary of State John Kerry has had a series of meetings, including bilateral talks with his Russian counterpart Sergey Lavrov.

"It has been a productive day" with "good meetings", Toner said, adding that the U.S. still wants "an immediate cease-fire and humanitarian access" in Syria. "We're continuing to pursue those goals in the meetings now, but I don't have anything to announce yet," he said.

All stakeholder members of the International Syria Support Group that is seeking a diplomatic solution to the crisis in Syria, had clearly identified that a cease-fire would not include "Daesh or [al] Nusra and a couple of other groups", Toner said without identifying the other groups.

The recent dispute between NATO allies Turkey and the U.S. centers on Washington's objection to labeling the PYD as a terrorist group, instead classifying it as "a reliable partner".

Ankara summoned on Tuesday the U.S. Ambassador John Bass to the Turkish Foreign Ministry over the State Department spokesman John Kirby's remarks on 'not considering the PYD, YPG as terrorists'.

"Syrian Kurds are our partners against DAESH," Kirby said, stoking the flames of a rift between Ankara and Washington.

The group was not invited to the talks by the UN's special envoy for Syria who called the meeting. Turkey lists the PYD and its armed wing, the People's Protection Units (YPG), as terror organizations.

The PYD is largely accepted as the Syrian wing of the PKK, which is recognized as a terror organization by the U.S., the E.U and NATO. The group recently opened an office in Moscow adorned with a poster of PKK leader Abdullah Öcalan.
Last Update: Feb 12, 2016 9:03 am
RELATED TOPICS