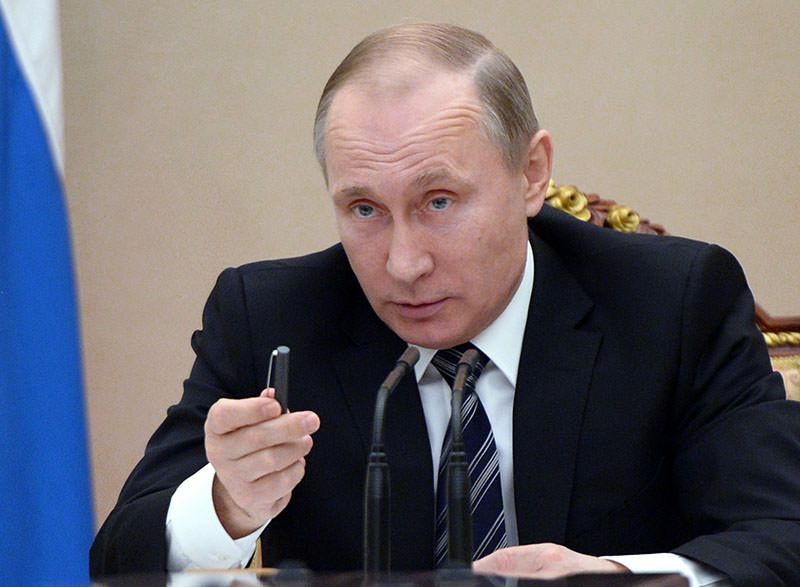 Russian President Vladimir Putin speaks at a meeting with the Cabinet in the Kremlin in Moscow, Russia, Feb. 10, 2016. (AP)
by Compiled from Wire Services Feb 13, 2016 12:00 am
France led international criticism of Russia on Saturday for bombing civilians in Syria, a charge Russian Prime Minister Dmitry Medvedev rejected as major powers bickered openly just a day after they agreed a pause in combat in Syria.

The differences between the stakeholders in a Syria settlement highlighted their lingering divisions despite Friday's "cessation of hostilities" agreement, which was not signed by any of the warring parties on the ground - government forces and the opposition - and does not take effect for a week.

French Prime Minister Manuel Valls, in a head-to-head debate with Medvedev at a security conference in Munich, pressed Russia to stop bombing civilians in Syria, saying this was crucial for achieving peace in the country.

"France respects Russia and its interests ... But we know that to find the path to peace again, the Russian bombing of civilians has to stop," Valls told the conference.

Valls also warned that the European project could "disappear" if policymakers were not careful.

"The European project can go backwards or even disappear if we don't take care of it," he said. "If Europe doesn't show it can respond, not only to economic challenges but also to security challenges, then the European project will be finished because the people won't want it anymore."

Ukrainian president also spoke Saturday at the Munich Security Conference, saying that Russia is living in a "completely different universe" and is pointing to the risk of an "alternative Europe" led by Russian President Vladimir Putin.

Petro Poroshenko made the comments after Russian Prime Minister Dmitry Medvedev accused the West of rekindling the Cold War.

Poroshenko blasted Russia's actions in Ukraine and Syria and said they are "a demonstration that we live in a completely different universe with Russia."

He said that the main danger to Europeans now is an "alternative Europe with alternative values" such as isolation, intolerance and disrespect of human rights. Poroshenko added: "This alternative Europe has its own leader. His name is Mr. Putin."
Last Update: Feb 13, 2016 1:13 pm
RELATED TOPICS