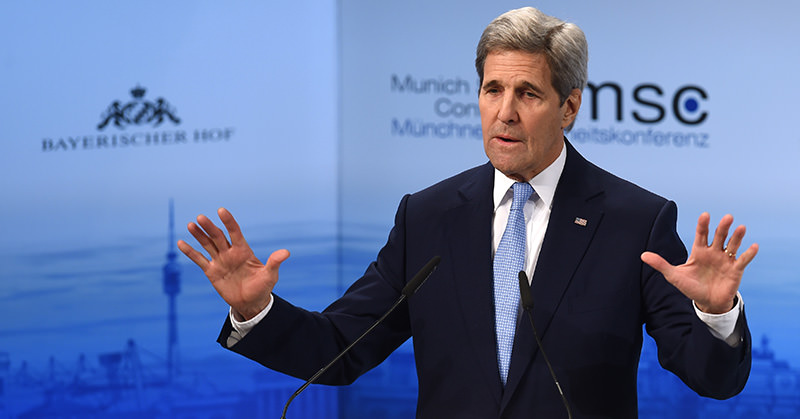 US Secretary of State John Kerry speaks during the second day of the 52nd Munich Security Conference (MSC) in Munich, southern Germany, on February 13, 2016 (AFP Photo)
by Feb 13, 2016 12:00 am
"Russia must stop targeting Syria's legitimate opposition as part of an air campaign in support of the Assad regime before a truce can be implemented next week, US Secretary of State John Kerry said Saturday.

"To date, the vast majority of Russia's attacks have been against legitimate opposition groups," Kerry said at the Munich Security Conference. "To adhere to the agreement it made, Russia's targeting must change."

"The entire International Syria Support Group, including Russia, will work together to ensure that happens," Kerry said, referring to more than a dozen countries that agreed early Friday to implement a truce in one week's time.

The agreement, whose signatories include regional rival powers Saudi Arabia and Iran, foresees a "pause" in fighting while details of a more permanent ceasefire are negotiated.

Russia has insisted it is only targeting "terrorists" as part of its campaign.

Russian Prime Minister Dmitry Medvedev, who attended the Munich conference in place of President Vladimir Putin, said that there was no evidence Russia was bombing civilians in Syria. The accusation had been earlier levelled by his French counterpart, Manuel Valls.

Supported by Russian airstrikes, Assad's forces are trying to encircle the strategic city of Aleppo " a stronghold for the Syrian opposition - and cut off their supply route from Turkey.

The Russian campaign seemed to be intensifying on Saturday, with a monitoring group reporting airstrikes against a rebel-held area in the town of Tel Rifaat in northern Aleppo.

"The intensity of the raids has increased in the past 24 hours," said Rami Abdel-Rahman, the head of the Syrian Observatory for Human Rights.

Tel Rifaat, around 20 kilometres from the Turkish border, is one of the last rebel strongholds north of Aleppo. Assad's forces are just three kilometres away, according to Abdel-Rahman.

"This intensity sets the scene for a ground advance [by Assad troops] towards Tel Rifaat and Azaz," two rebel-held areas on the northern edge of Aleppo, he said.

On Friday, US Defence Secretary Ash Carter told reporters that the UAE was ready to "restart their participation in the air campaign" against Daesh and stressed the key role of both the Emirates and Saudi Arabia.

He implied special forces from the Gulf would help "local forces" in Syria to retake al-Raqqa, Daesh's de facto capital in the north.

Tens of thousands of people have fled the airstrikes, creating a humanitarian crisis on the Turkish border, which remains closed to the refugees.