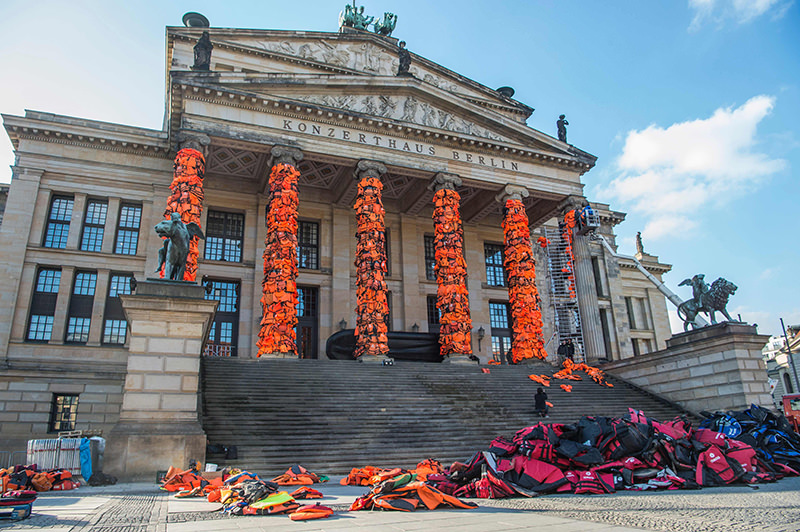 The bright orange vests were wrapped around the pillars of the city's Konzerthaus by the artist's team Saturday to highlight the plight of the hundreds of refugees trying to reach Europe every day by sea from Turkey.

Municipal authorities on Lesbos said they'd given some 14,000 life vests to Ai for his art project. Ai has repeatedly visited Lesbos since the refugee crisis started.

Tens of thousands of life vests remain strewn on the island's beaches and at a landfill near its north coast where most landings occur.

Both Turkey and Greece are struggling to cope with the surge of refugees. The Coast Guard constantly patrols the long stretch of coast in search of refugees and their smugglers, just like their Greek counterparts who are looking to intercept migrants before they reach the islands.

The Turkish coast, especially the shores of provinces likes Çanakkale, İzmir, Muğla, Balıkesir and Aydın, provide a launch pad for refugees seeking shelter in Europe, due to its proximity to the Greek islands– the main gateway to the continent from Turkey by sea. According to the latest figures, the Coast Guard intercepted more than 97,000 migrants off the country's Aegean and Mediterranean coasts as they headed to the Greek islands last year and in the first two months of 2016. The figures are far higher than those intercepted by the Coast Guard in 2014 and point to a serious escalation of the refugee crisis further fueled by the ongoing conflict in Turkey's southern neighbor Syria. Some 390 people have died en route to Greece since January 2015, the Coast Guard reported. According to the International Organization for Migration (IOM), the death toll for migrants in the eastern Mediterranean, including those who died near the Greek islands, reached to 1,024 from January 2015 to January 2016.

As winter set in, many predicted that the refugee influx would decrease, but more migrants have arrived on Turkish beaches, according to media reports. The migrant flow has ceased over the past two weeks due to severe storms in the Aegean Sea separating Europe from Turkey. However, eyewitnesses say migrants rushed to the beaches on the country's Aegean coast, which stretches for more than 2,600 kilometers from Çanakkale and Balıkesir in the northwest to Muğla in the southwest where migrants depart from secluded spots. Migrants, mostly Syrians, race to join hundreds of thousands of people who reached Europe via the Aegean Sea last year, clinging to their hopes of survival with life vests and dinghies, which often turn out to not be seaworthy. More than 850,000 migrants arrived by sea in Greece last year, making up the majority of the more than 1.1 million refugees who entered the EU last year.

Countries in Europe are also facing the largest refugee flow since the end of World War II, and have stepped up measures on the borders to curb the influx – despite this dealing a blow to the unity of the continent where borders merely serve as landmarks and citizens of European Union member states can travel freely between countries. The EU reached an agreement with Turkey to provide the country with funds to handle the issue. But a worsening conflict in Syria with the rise of DAESH, a similar crisis in Iraq with DAESH expanding its operations and a comeback by the Taliban in Afghanistan coupled with a high rate of poverty may further increase the number of migrants flocking to Europe.

To efforts to curb the refugee flow to some extent, Turkey is repeatedly calling for the establishment of safe zones within Syria for displaced people. The international community remains reluctant, however, and Russia's increasing airstrikes that kill civilians are reducing the chance of implementing the plan.
Last Update: Feb 15, 2016 6:49 pm
RELATED TOPICS