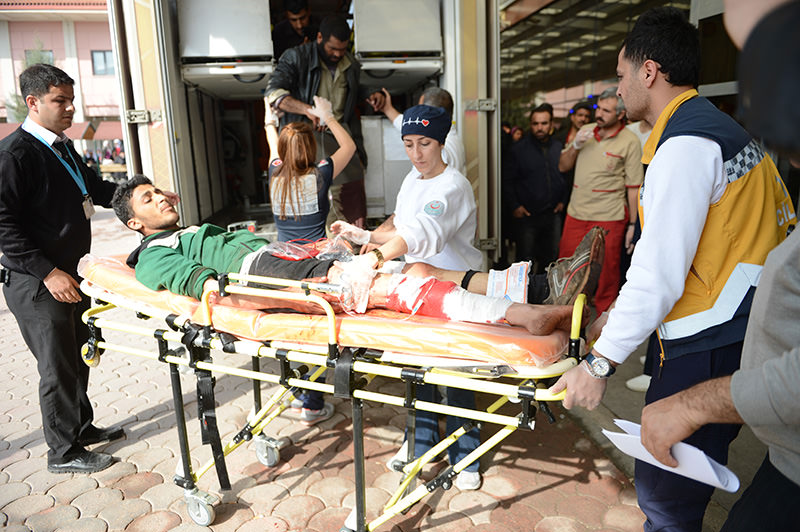 by Compiled from Wire Services Feb 15, 2016 12:00 am
Almost 50 people, including many children, have been killed in missile attacks on at least five hospitals and two schools in the Syrian provinces of Aleppo and Idlib, UN spokesman Farhan Haq said in New York on Monday.

The medical charity Doctors without Borders (MSF) reported earlier that seven people were killed and eight others were presumed dead in a strike on a hospital it supported in Maarat al-Nuaman in Idlib.

The group did not say who was responsible for the airstrike. The Syrian Observatory for Human Rights, an opposition monitoring group, said it appeared to have been carried out by Russian forces.

Meanwhile, a Turkish security official confirmed Reuters that seven Russian missiles struck a hospital in the northern Syrian town of Azaz on Monday, adding the the civilian death toll to rise.

Speaking to Anadolu Agency, local civil defense officer Abu Muhammad said that several positions in the opposition controlled-town together with Azaz-Al-Salam route were targeted with cluster bombs and 10 civilians were killed in the offensives. As wounded people were brought to hospitals in Turkey's southeastern Kilis province, Muhammad said Russian jets had hit hospitals and schools in the heavy offensives that target Azaz and the surrounding area. The town is 7 kilometers from the Turkish border.

Tens of thousands of people have fled to the town, the last rebel stronghold before the border with Turkey, from towns and villages where there is heavy fighting between the Syrian army and militias.

"We have been moving scores of screaming children from the hospital," said medic Juma Rahal. At least two children were killed and ambulances ferried scores of injured people to Turkey for treatment, he said.

French charity Doctors Without Borders/Médecins Sans Frontières (MSF) said in a statement that at least eight staff were missing after four rockets hit a hospital that it supported in the province of Idlib in northwestern Syria.

Both the PYD and the regime want to wrest control of that stretch of border with Turkey from the insurgents.

Russian bombing raids on rebel fighters are helping the Syrian army to advance toward Aleppo, the country's largest city and commercial center before the conflict. If the army takes the city, it will by the Syrian regime's biggest victory of the war.