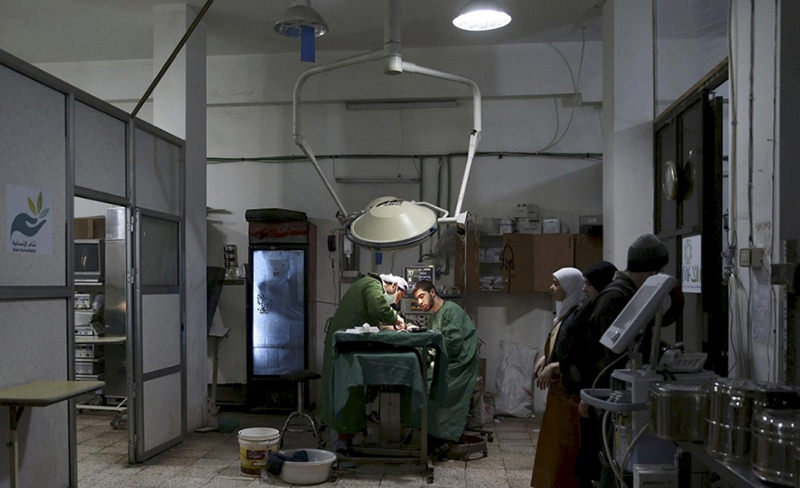 Medics in Douma area treating the injured in basements and other improvised shelters (Reuters Photo)
by Compiled from Wire Services Feb 17, 2016 12:00 am
Some rooms at Rakaya Hospital are six meters deep, but they are not being used as temporary morgues.

Rather, their purpose is keep patients and doctors alive in a country so used to death.

Pharmacist Amer al-Salloumm told Anadolu Agency that while digging underground rooms may help protect medical staff who are often targeted by Russian and regime warplanes, it is not ideal for storing medicine because of the humidity.

Fuel for electric generators to power the underground rooms is scarce and most often insufficient.

Even so, Salloumm believes that "suffering underground, however, is much better than facing death or amputation."

Located near the city of Idlib, the field hospital has been treating Syria's wounded since the beginning of the conflict in 2011.

Approximately 50,000 people have been treated for various war-related injuries onsite without pay, despite the fact that it is severely underequipped and understaffed due to financial constraints.

According to the Syrian Network for Human Rights, Russian warplanes have targeted 163 facilities in Syria since September 2015, including hospitals, schools and mosques.

The United Nations and the European Union condemned Russian airstrikes on medical facilities and schools in Syria that the world body said killed almost 50 civilians, with the U.S. implicating Russia.

More than 260,000 people have been killed since Syria's conflict began with anti-government protests in March 2011.