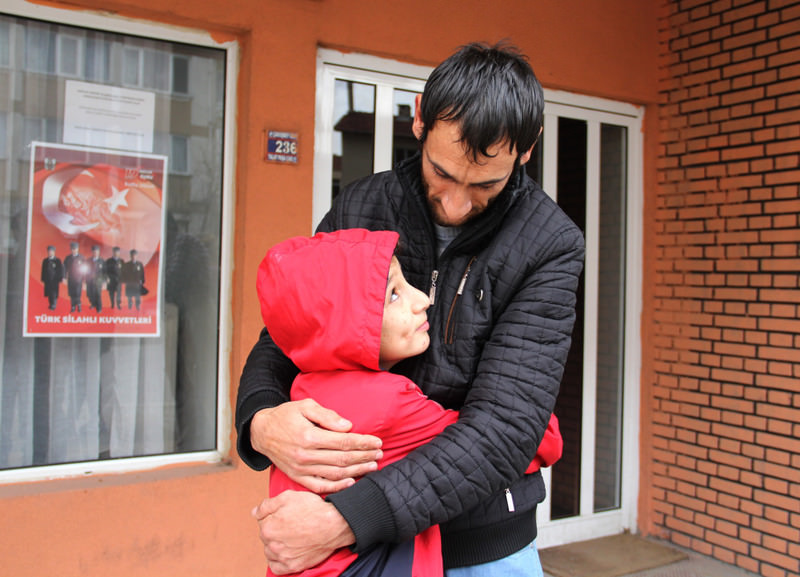 by Daily Sabah with Wires Feb 18, 2016 12:00 am
Mirvan can count himself as lucky. He survived the ordeal of being a refugee and was reunited with his brother, the only member of his family in Turkey, after four months lost. The 13-year-old Iraqi boy could have been among the refugees who froze to death while attempting to cross into Europe through forests and mountains on foot or the unfortunates drowned in the rough waters of the Aegean. He had a chance of survival after being discovered by authorities while with a group of migrants. The minor was reunited with his older brother Badal on Tuesday at a social services center in the northwestern city of Edirne, near Turkey's border with Bulgaria and Greece.

Mirvan's family decided to send him to Turkey, the nearest safe haven for Iraqis fearing death or worse at the hands of DAESH. Mirvan hails from Mosul, where the terrorist organization has terrorized the population. Accompanied by his relatives who were intent on sneaking into Europe, Mirvan traveled to Turkey. The group reached Istanbul and was planning to go to Edirne, along the land route to Europe, but Mirvan found himself entangled with another group of migrants and lost contact with his relatives. The group was intercepted by Turkish authorities while attempting to cross the border, and Mirvan was handed to social services, as he was a child traveling without parents or next of kin. His elder brother Badal Camil looked for him. Just when he nearly abandoned hope, a friend who was traveling to Europe called and said he had seen Mirvan in Edirne. Badal contacted migration services and learned that Mirvan was staying at a social services shelter. On Tuesday, the two brothers were reunited in the northwestern city and hugged in a moment of joy amidst the ordeal of refugees whose lives were shattered by wars and poverty.

Speaking to Anadolu Agency, Badal said their family thought Mirvan would be safer going to Turkey rather than staying in Mosul "where DAESH does bad things. I came here to find him when others traveling with him told me they lost him. I searched everywhere in Istanbul. One day, someone I knew from Iraq told me he saw Mirvan in Edirne. I spoke to authorities in Edirne and they helped me to find him. I saw they took care of him very well. I appreciate it," Badal said.

Syria and Iraq are gripped in turmoil due to the presence of DAESH, which controls large swathes of land in both countries. The DAESH threat has further aggravated the refugee crisis that erupted after Syria descended into a civil war. Europe has seen a mass exodus of refugees from the Middle East and Africa over the last year, numbers unprecedented since World War II, and the trend seems likely to continue as the DAESH presence in Iraq and conflict in Syria show no sign of dwindling. Last year, more than one million migrants, mostly from the Middle East, arrived in Europe by land and sea, according to the International Organization for Migration (IOM).
RELATED TOPICS