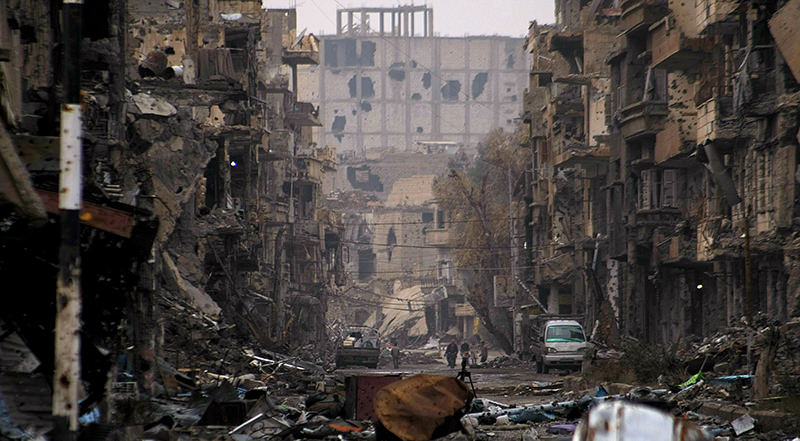 Syrians walk along a severely damaged road in the northeastern city of Deir Ezzor on January 4, 2014 (AFP Photo)
by Feb 18, 2016 12:00 am
The United Nations should be able to deliver aid to all of Syria's 18 besieged areas within a week, a senior UN official said Thursday, after life-saving supplies reached five locations.

Jan Egeland, who is the special advisor to the UN's Syria envoy Staffan de Mistura, made the comments after a meeting of representatives from the 17-nation International Syria Support Group (ISSG).

"We discussed the next phase which is to reach all of the remaining besieged areas of Syria. And we should be able to do (so) before the next meeting which will be in a week," Egeland said.

Egeland said that there was plan to deliver aid to the eastern city Deir Ezzor, the majority of which is controlled by Daesh and where an estimated 200,000 people still live.

The UN official said the World Food Programme "has now a concrete plan" to conduct humanitarian air drops over the city and that this prospective operation has the support of both the United States and Russia.

The operation was made possible by a deal struck at an ISSG meet in Munich last week, where many of the key actors in the Syrian conflict, including Damascus ally Russia, agreed to increase humanitarian access.

The ISSG also reached a deal on a cessation of hostilities in Syria, but its prospects appear grim amid continued fighting.

The UN estimates that there are more than 480,000 Syrians living in areas besieged by the government, rebels and terrorist forces.

More than four million others are living in what the UN defines as "hard-to-reach" areas.